AGRICULTURAL engineers at the University of Southern Queensland (USQ) are developing ways to boost the resolution and detail of crop imagery taken by over-flying drones to match the higher levels achieved by ground-based imagery methods. 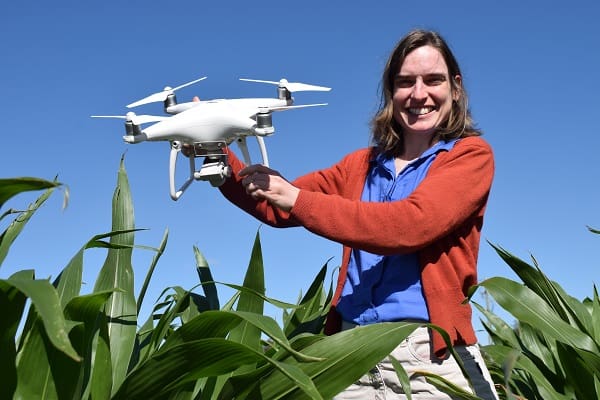 Dr Cheryl McCarthy is working to lift the crop imagery capabilities of drones.

USQ research fellow, Cheryl McCarthy, said ground-based imagery for tasks such as weed spot spraying or identifying areas of interest currently achieved a much higher resolution image than what could be obtained from a drone.

Dr McCarthy said that, typically, imagery obtained by drones was useful for general visual inspections and generating broadscale maps of crop health with only minimal detail.

The information often needed to be verified with field and ground truthing.

“In a general sense, our research is about how do you get the resolution and discrimination ability you get from a ground-based camera into the air?” she said.

“..our research is about how do you get the resolution and discrimination ability you get from a ground-based camera into the air?”

“When you move the camera from the ground to the air you not only lose pixels but also colour differentiation as well. You lose perspective. We are looking into bringing the technology that is working on the ground up to a higher scale for use from the air.”

Dr McCarthy said if that could be achieved it would open up new opportunities and efficiencies for drone applications, or the use of a combination of ground and aerial imaging.

“At the moment with off-the-shelf, commercial drone processing technology you have to get 80 per cent overlap when you fly across a field. You only move across about 20pc each pass,” she said.

“The technology we are working on is trying to remove the requirement for the overlap. That immediately reduces the flight time. So, importing the ground-based system to the air is also a matter of asking whether we need to do the mosaicking process to get what we need.”

Dr McCarthy said the goal of the research was to develop a drone format that was straightforward and easy for farmers and consultants to use, rather than a research-type prototype.

“We are aiming for the smallest cameras possible that can just be hooked onto the consumer drones,” she said.

In line with the research, Dr McCarthy is participating in a project in collaboration with CSIRO and funded by the Cotton Research and Development Corporation (CRDC) using both ground-based and drone technologies to look at fibre quality in cotton.

“Given that cotton crops at the moment are managed to optimise yield, not fibre quality, our research project is looking at what sensors can be deployed in the field during crop development that give us information that can then be used to infer the resultant fibre quality,” she said.

“We have some ground-based sensing with colour cameras and near-infra-red technology that sees beyond what a human can see. And we are also looking at the crop as it’s growing from a drone and pulling out some of that machine-vision-level information like the size of the plant, the number of flowers and the size of bolls.”

In close association with Dr McCarthy’s work on drone and sensor technologies, USQ post graduate student, Jake Humpal, is working on a project developing reflectance imaging sensors that can distinguish crown rot in stands of wheat. Jake Humpal is working on reflectance imaging sensors that can distinguish crown rot in stands of wheat.

“I am creating models from that data to later deploy on drones using new techniques in data processing to allow for the discrimination of some of the diseases that aren’t physically easy to discern,” he said.

“Reflectance imaging is how you see light. It passes what the human eye can see using sensors to get readings from ultra violet and near infra-red spectrums.”

Mr Humpal said sometimes the sensors could find indicators of disease and other issues that weren’t in the visible spectrum of the human eye.

“In the visible spectrum it is primarily looking at symptoms you would see on the plant. With the near infra-red spectrum it is actually seeing molecular interactions under the surface. It is picking up how molecules are interacting and it might be able to see a heat signature that you wouldn’t be able to detect if you just walked into the field.”

While the project is still in the early stage focused on collecting data from glass house plants to develop models for accurately finding crown rot, testing is soon to move into the field with the goal of developing sensors that could cover a whole crop.

Mr Humpal said the ultimate aim was to develop a number of configurations of the technology ranging from sensing tools that were easy for farmers and consultants to use, to tools for researchers to use in trials.

“What some of the point-based sensors are showing potential for is a hand-held sensor that would be good for use in resistance breeding, phenotyping glass house work where plants are readily available,” he said.