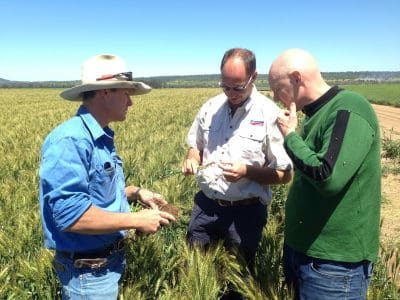 In accepting the awards, Mr Klausen praised all those involved in producing Brasserie Bread, and Australian consumers for demanding change and traceability of foods.

“I am so proud of all the people who have been willing to come with me on this journey and accepting that we just can’t keep doing what we are doing and we have to change the system,” he says,” Mr Klausen said.

“I can just see good things coming out of this which is fantastic. Today we can now put a loaf of bread on the table and tell you what paddock it is from and that is extremely important.”

Brasserie Bread primarily uses flour from FPM Cereal Milling at Tamworth, and made from wheat grown on selected farms at North Star, Coonamble and Forbes in NSW, and near the Flinders Ranges in South Australia.

“Michael works with the farmers to select the varieties of wheat sown to produce the precise flavour and baking characteristics it needs to produce a really world-class product,” NSW DPI director general, Scott Hansen, said.

“Each artisan bread product is baked with the utmost skill and care, using high-quality fresh ingredients to produce flavoursome products of remarkable character.”

Mr Blair said the Innovation Award recognised the strength of Brasserie Bread’s social and economic contribution to its community, as well as the quality of its produce.

The RAS said the President’s Medal was the pinnacle of the Sydney Royal Wine, Dairy and Fine Food competitions across the calendar year, and recognised Australian producers that created the highest quality products by sustainable means.

Brasserie Bread was nominated for its Flinders Ranges Sprouted Wheat Loaf in the Professional Bakery Competition, which was awarded for its “astounding volume, delicate crumb and good texture”.

NSW Royal Agricultural Society’s Fine Food Committee chair, Lyndey Milan, said Brasserie Bread had created a unique relationship with the farmers who grow the wheat from which the flour they used was made.

“That is the ultimate in provenance of food and that is really what underpins the President’s Medal,” Ms Milan said.

The 2018 President’s Medal winner was chosen from a field of 85 champions over 488 classes with a total of 5308 entries.

John Campbell of Provenance Flour helped to establish the relationships between Brasserie Bread and its grower/suppliers.

“Both the awards are as special as each other, and it’s great to see Brasserie Bread being recognised for the relationships it has built,” Mr Campbell said.

Mr Klausen talks regularly with the growers behind the flour Brasserie Bread uses, and also consults Kevin Sherrie at FPM Cereal Milling, and LongReach wheat breeder and the father of the Lancer variety, Bertus Jacobs.

“When you get a baker, a wheat breeder, a miller and a grower together in the one paddock having a conversation about grain characteristics, that builds a unique supply chain, and that’s something Michael has done.”

Brasserie Bread was awarded $10,000 cash and a stand inside the coveted Dome during next year’s Easter Show.

Mr Klausen and Tony Papas founded Brasserie Bread following a move into artisan baking which started with them wanting to create a flavoursome and consistent sourdough for their iconic Sydney eatery, Bayswater Brasserie.  Brasserie Bread is now based at Banksmeadow in Sydney, and has additional bakeries in Brisbane and Melbourne from which it supplies stores, cafes and restaurants.