NEW insight into how different wheat varieties respond to drought, published by researchers from The University of Western Australia, shows a novel avenue for breeding drought-tolerant wheat. 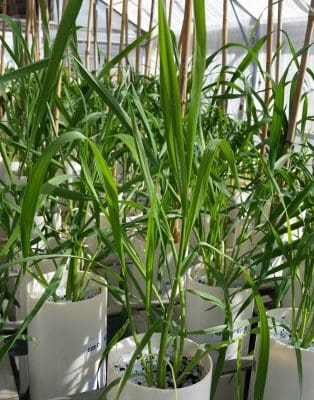 Non-stressed wheat growing in a glasshouse.

Water shortage is a major factor limiting crop yield in most regions where dryland, rainfed farming occurs, such as Western Australia’s grainbelt.

Leading researcher, Professor Guijun Yan from UWA’s School of Agriculture and Environment and Institute of Agriculture, who led the research is working to develop climate ready crops that are adapted to water stress.

He said the extent of yield limitations due to water stress lays heavily on the particular growth stage at which plants experience the stress, and the reproductive phase is the most critical.

Water was withheld during the reproductive phase, meiosis, in 46 different wheat varieties, to examine what effect the induced drought on the viability of male and female reproductive parts of the plant. Grain number, a major yield component, was used to measure the effect.

Professor Yan said the results indicated that both the male and female parts were sensitive to water stress during meiosis, not just the male part as was previously thought.

“We identified for the first time that the stressed female reproductive part was one of the major contributors to low grain number in wheat varieties that were water-stressed during meiosis,” Professor Yan said.

“Based on the results of this study, we can conclude that selective screening of grain number for parental lines that are tolerant to water stress during meiosis is a promising way to breed superior drought tolerant wheat.”