WHILE Canada’s barley production most years this past decade has been around eight million tonnes, and exports were about 30 per cent of the crop, this year higher area and production are likely to continue to change the mix of destinations for Canada’s barley exports.

China looks set to be the beneficiary of Canada’s increased export availability, a welcome development in the light of Australia’s lower 2018/19 crop forecast, according to a report published recently by the United States Department of Agriculture (USDA).

Canada is a relatively small but growing exporter of barley. Its exports for the Oct-May period to China have already exceeded the total volume shipped in the entire 2016/17. 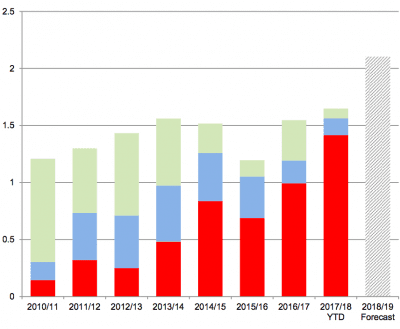 Chart 1: Canada barley exports, million tonnes. “All other” destinations, top bar on chart, quantity has declined over time as destination China (red bars) has expanded. Shipments to US are shown in blue. (Source: USDA)

A larger than expected Canadian barley crop in 2018/19, coupled with a lower crop forecast for Australia, could see Canada’s barley exports to China reach new heights in 2018/19.

Canada’s barley export pattern has changed in favour of China

Once the largest destination, the United States is now seeing less of Canada’s barley coming across the border.

Over the last several years, border-adjacent states such as Minnesota, Wisconsin, and North Dakota have seen the largest drop in barley shipments.

Canada’s exports to Japan have fallen precipitously as well.

In the place of the United States and Japan, China has emerged as the top destination. China’s total imports of barley have risen dramatically over the last half-decade, as there are no import quotas or biotech related restrictions.

While China’s strong appetite for feed barley will be met primarily by Australian supplies, demand for the price-competitive Canadian barley is likely to continue as well.

This article is an edited extract of the USDA report published as a market feature in USDA Grain World Markets and Trade on 12 July 2018.