WESTERN Australia’s estimated canola area has dropped 9.2 per cent in the past month, while the forecast barley planting has risen 5.2pc to a record high, according to the Grain Industry Association of Western Australia (GIWA) June crop report released on Friday. The state’s barley area is now forecast at 1.6 million hectares (Mha), with attractive prices, substitution from canola due to the lack of early rain, and resowing of wind damaged paddocks, behind the lift.

GIWA’s forecast 2018 canola area at 1.09Mha is now 300,000ha below the 2017 figure, which reflects a lack of early rains which would have encouraged growers to plant canola in time to benefit from a longer growing season, and expect better yields as a result.

Good general rains have fallen in the Geraldton, West Kwinana and West Albany port zones since GIWA released its previous crop report on 11 May, and the east Kwinana port zone has also received reasonable falls of rain enabling most crops to emerge.

GIWA reports rainfall has been light in the Lakes Region, with more rain needed in the south of WA’s grain belt over the next few weeks to get a full emergence of crops.

The rainfall in the South Albany and Esperance port zones has been very low to nil in the past month, and these areas will need good general rains soon to have any chance of returning average grain yields based on the dry winter rainfall forecast.

“It’s been pretty much a straight substitution out of canola,” Mr Lamond said.

“A lot of that came because of these fronts which were blowing gusts of up to 100 kilometres an hour, and bringing no rain with them.”

“Canola has a more fragile seedling than cereals, and some crops in those fronts really got blasted by the wind, or buried.”

“A lot of those southern areas experienced those successive damaging winds, and most paddocks that had canola that suffered didn’t have herbicide on it might well have barley in by now.”

Mr Lamond said WA’s western cropping regions in the Geraldton and Kwinana zones were in good shape, and on track to produce average or above-average yields.

While the eastern half of the Kwinana zone got rain a week later than would have been ideal, most of its crops were also on track to yield well.

“It’s the areas around Lakes Grace and Esperance, and the eastern part of the Albany zone that aren’t doing so well.”

The seasonal rainfall outlook from WA’s Department of Primary Industry and Regional Development’s (DPIRD) statistical model for June to August shows a preference towards below-average rainfall.

Half the international climate models observed have a neutral outlook for this period, meaning no preference towards either wetter or drier than normal conditions. About one third of models have indicated below-average seasonal rainfall is more likely.

Most of the areas in the north and eastern wheat belt of WA that delivered little or no grain last year have now had enough rain for crops to emerge. 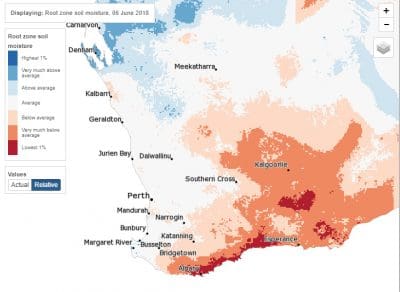 The Bureau of Meteorology (BoM) seasonal outlook summary for June to August indicates: