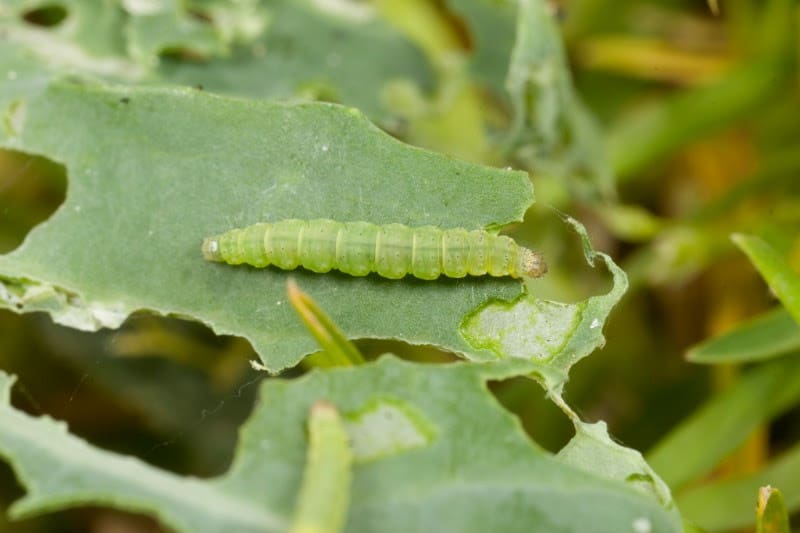 DBM (Plutella xylostella) caterpillars, or larvae, grow to 12 millimetres long, are pale yellowish-green and tapered at both ends, and can cause severe yield losses in canola, through feeding, when in high numbers.

“Sweep net your crops early, sweep often and be aware that you can often obtain economically viable results even from spraying crops that have lower yield potential,” Mr Wilkins said.

“It is important to sweep net canola crops regularly because, as they go through their life cycle, DBM numbers picked up from sweeping can go through ‘waves’ and can vary depending on what stage the population is at in its life cycle.”

Mr Wilkins, who is also a Grains Research and Development Corporation (GRDC) Western Region Panel member, said the DBM control threshold for the mid to late-flowering stage of canola that was not moisture stressed was more than 100 caterpillars per 10 sweeps.

“A lower threshold may be used during extended dry periods and information on thresholds is available in the GRDC Diamondback Moth Fact Sheet at www.grdc.com.au/GRDC-FS-DBM or on the Department of Primary Industries and Regional Development (DPIRD) website at http://bit.ly/2x5sRu5,” he said.

Agronomist and GRDC Western Region panellist, Michael Lamond, encouraged growers to be vigilant and aware of the potential for DBM to damage crops.

“This season, canola crops are finishing later in the season than they have in recent years, which means the plants are maturing during a warmer period in spring,” he said.

“This year is shaping up to be more of a problem year for DBM than in the recent past, and in most canola crops there are currently low levels of the pest which have the potential to increase rapidly.”

Mr Lamond encouraged canola growers to contact their adviser or retail agronomist for guidance on DBM management this season.

“Last year, many canola crops in low rainfall regions were either not sprayed or sprayed too late, resulting in significant grain yield loss,” he said.

Mr Lamond said other canola pests this season included turnip aphids (Lipaphis pseudobrassicae) which he said were building up in numbers in WA’s southern cropping areas.