IT has been a windfall year for canola production in Western Australia with crops producing record yields and exceptional oil levels across all growing regions, except those districts hit by damaging frosts in September/October. 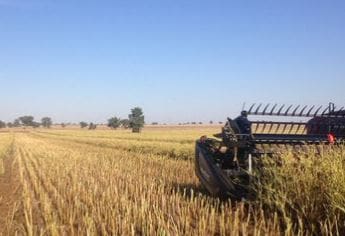 Western Australia is on track to produce 1.942 million tonnes of canola this year.

As harvest progresses into the southern regions, the state is expected to produce 1.942 million tonnes of canola this year, up 25.9pc on last year.

Yields have been at record levels in many areas and oil content recordings have been exceptional, in some cases topping 50 per cent.

In the northern growing region where canola harvest is done and dusted, Agrarian Management consultant, Craig Topham, Geraldton, said while last year had been a good year for canola, this year topped it with record yields and quality.

“Depending on location, soil type and sowing time, yields have ranged from 1.0 tonne/hectare to over 3.0t/ha. Over large areas many people have averaged between 2.0t/ha and 3.0t/ha,” he said.

“Oil content for the better varieties like 404 are 2 per cent above most of the Roundup Ready varieties and the majority of the TT canola sown is Bonito which has been ranging from 47pc to 50pc oil, with the odd load hitting 51pc which is exceptional.

“When you start getting 50pc oil there is $55 to $60 oil bonus attached to the price, depending on your contract. It makes it very attractive.”

“This year it was very early sowing, good soil moisture and a long, soft, cool finish that did it. There wasn’t a huge amount of rain, but there was a lot of cloud cover and mild temperatures. That’s the secret,” he said.

It is a similar story in the Kwinana Zone, particularly in the Midlands and Kwinana East regions where early sowing and an extended mild finish produced yields and oil content beyond expectations.

Canola yields there have been exceptionally high with excellent oil percentage. Most averages are over 2 t/ha, even in eastern districts.

Traditionally, canola yields around 50pc to 60pc of cereals, but in 2016 it has exceeded cereal yields in a few cases and been close to 90pc in others.

In the eastern areas of the Kwinana zone, it was more of a mixed bag for canola with frosted crops down to 500 kg/ha with low oil. However, unaffected crops are producing at about 1.4t/ha with good oil at 48pc.

In the Lakes region of the Albany Zone, frosts in September/October have cut production on affected crops by about 25pc with yields coming in of 1.1t/ha to 1.2t/ha, about 300kg less than the potential before frosts. Oil percentages have been high at 48pc.

Further south in the Southern Albany Zone, canola harvest progress has been slow with the main focus still on barley harvest. In severely frosted canola crops, the oil percentage has been low but the vast majority is producing exceptional quality.

Harvest progress in the lower Albany zone has been slow with canola still the main focus with some barley also being harvested. In severely frosted canola, the oil percentage has been low but the vast majority is producing exceptional quality.

In the Esperance zone, canola yields are higher than forecast in all districts with excellent oil content at 48pc plus.