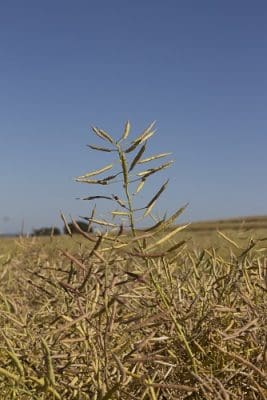 With around 70 per cent of canola yield coming from pods on the side branches, growers are encouraged to assess seed colour change in all pods before windrowing to maximise yield and oil content while minimising the amount of green seed at harvest.

While most growers and agronomists are aware of this key indicator, there are some misconceptions about what constitutes seed colour change and how it should be assessed.

South Australian consultant Trent Potter, Yeruga Crop Research, said growers must stay in control of the timing for windrowing and desiccation, and need to know how to assess the maturity of the seed themselves.

“Adverse weather events such as a very dry finish or frost, such as is occurring in NSW this year, can result in low yields, low oil content and increased levels of green seed as the seeds are killed before they are fully mature. Unfortunately, there is nothing growers can do about that,” he said.

“However, under favourable conditions the correct timing of windrowing or desiccation will mean growers maximise the yield and the oil content and also avoid any penalty for green seed.”

Mr Potter said it was imperative that growers opened the pods and checked the seed colour themselves.

“A visual estimation based on pod colour is not sufficient and will result in lost profits if not quality downgrades,” he said.

The timing of windrowing has been the subject of significant research effort co-funded by the GRDC, NSW Department of Primary Industries, CSIRO and partner organisations under the Optimised Canola Profitability project (CSP00187).

Researchers have re-confirmed studies from the 1970s and 80s that showed physiological maturity in canola is reached when 40–60 per cent of seeds on the main (primary) stem change colour from green to red, brown or black.

However, their research has also shown the importance of assessing seed colour change on the canola plant branches as around 70pc of the crop yield is held on the plant branches rather than the main stem.

NSW DPI’s Rick Graham, Tamworth, said windrow timing studies in 2015 and 2016 at Tamworth and Trangie, and Edgerio in 2016, clearly demonstrated the importance of correct timing. 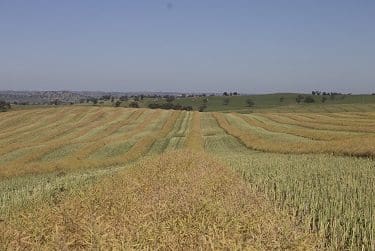 There is less than a week between windrowing canola too early and optimal timing.

“There was less than a week between too early and optimal timing. In five days the seed colour change on the primary stem increased from 18pc to 61pc,” he said.

There is a significant delay in physiological maturity between seed in pods on the stem and pods on the branches, and this needs to be included in the grower’s assessment.

“For the seed in pods on the branches to reach 40 per cent seed colour change, the seed on the stem pods are likely to be as high as 60 to 80 per cent changed,” he said.

“For growers to maximise yield and oil content, and avoid rejection due to green seed, we recommend collecting pods from both stems and branches and assessing the overall seed colour change, rather than relying only on the maturity of the pods held on the main stem. Overall the seed colour change should still be 40–60 per cent red, brown or black seed collected from both the stem and the branches.”

“Green seed contains chlorophyll, which discolours the canola oil, adding to the cost of processing,” he said.

“The standard for green seed has not changed. There is no penalty for green seed up to a maximum of 2 per cent green seed, assessed visually. Grain can also be assessed using a laboratory test for chlorophyll where a maximum content of 12 parts per million is acceptable.

“This season what is classified as a green seed in the VRSG has been clarified and tightened and we are reminding growers that grain colour will be assessed against the visual standard published in this year’s VRSG.”