Central Queensland chickpeas pull ahead of wheat after dry start

CHICKPEAS are off to a better start than wheat in Central Queensland (CQ), where some late sorghum crops are still being harvested, and further chickpea plantings based on a strengthening price outlook and the crop’s ability to access subsoil moisture are not out of the question. 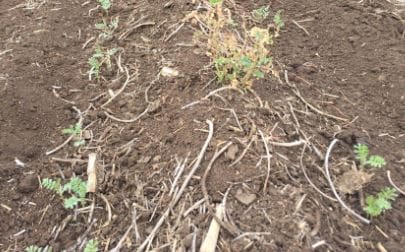 “We’ve got a significant area of chickpeas planted, and some of it has only just gone in,” Emerald agronomist, Graham Spackman, said early last week.

“The price is looking good, so growers would plant up to the end of July, even though anything planted past mid-June is generally considered a bit late for CQ because the chance of follow-up rain gets short in spring,” he said.

“It’ll give you a short growing season, but if you haven’t had a crop in over the summer, it might be an option worth considering.”

CQ typically gets most of its rain over summer, but patchy falls over the 2017-18 season meant that many growers did not plant any or all of their intended sorghum area, and have put winter crop into country with limited reserves of subsoil moisture. 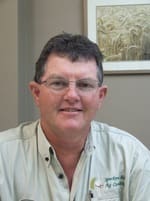 “We are in better shape than a lot of areas, and we’ve had more chickpeas planted than what we intended because, in a lot of cases, that was the only crop that could be planted.”

Mr Spackman said the most advanced CQ chickpea crops were planted in late April, and crops across the region sown deep to access subsoil moisture were taking two to four weeks to emerge.

“Quite a lot of chickpea crops have come up okay, and anything that was planted later is still coming up through the ground.”

“It’s been a good crop for us, and prices are strong.”

Some growers have this year taken the unusual step of dry-sowing wheat.

Those crops are now in need of 20-30 millimetres of rain this month to consolidate yield prospects.

However, CQ normally receives little to no rain over winter, and Mr Spackman said a lot of winter crops had not had enough rain at planting to get their secondary roots established.

“A rain now would bring a few more seedlings up and help the subsoil moisture, which is good in the southern highlands south of Emerald, but not so good elsewhere.”

Mr Spackman said not all intended wheat area across CQ was planted due to a lack of opening rain, and most wheat crops which had germinated were in a “poor to barely satisfactory” state.

Landmark Clermont branch manager, Anthony Lee, said some of the region’s wheat crops had emerged well, but others were struggling due to a lack of moisture, in some cases compounded by a short coleoptile length.

“Around 50 per cent of the wheat would be in reasonable shape, but all of our new varieties have been crossed with dwarf varieties which have a short coleoptile, whereas wheat with a longer coleoptile would be better for planting on stored moisture.”

Mr Lee said the Comet district east of Emerald, and areas south of Emerald, were the pick of CQ’s regions for seasonal conditions.

“Around Capella and Dysart, they’ve have had reasonable sorghum crops, but things have dried right off, and everything north of Clermont is very dry.”

Mr Lee said prospects for chickpeas, the crop which could confidently be planted at depth, were better than those for wheat.

“Some crops will really bounce away, especially if they started in better paddock conditions with more stored moisture.

“It shows the importance of chickpeas as our winter pulse now that all our seasons seem to be starting later.”