WHEN planning investments for 2017 harvest machinery, a chaff cart may prove an economic option for taking pre-emptive action against future problem weeds and herbicide resistance issues. 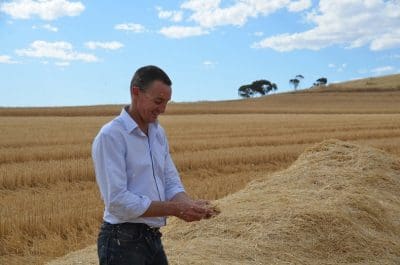 They are a top-line harvest weed seed control (HWSC) solution that can lower the weed seedbank effectively and cost-efficiently in a relatively short period of time and reduce reliance on in-crop herbicide use.

Key to the success of the chaff cart in capturing weed seeds for destruction is optimising the set up and operation of the harvester, according to Australian Herbicide Resistance Initiative (AHRI) communications leader and weed expert Peter Newman.

Mr Newman said a recent GRDC-funded national survey indicated 43 per cent of Australian grain growers already use some form of HWSC and 83pc of growers planned to implement a HWSC system in the next five years.

“Windrow burning has been the top HWSC measure in WA during the past decade because it is easy and cost efficient,” he said.

“But there are pitfalls in high nutrient removal in the windrows and it requires burning whole paddocks. 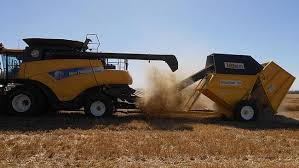 Chaff carts capture weed seeds in chaff from the harvester.

“Tools that focus on chaff collection – such as using chaff carts to capture weed seeds in the chaff, put this into piles and then graze or burn just the piles – remove fewer nutrients from the paddock and are less reliant on burning big areas of land.”

Mr Newman said the northern agricultural region of WA had been one of the global ‘hot spots’ for herbicide resistance – especially in annual ryegrass (Lolium rigidum) and wild radish (Raphanus raphanistrum) populations.

This had led the charge by local growers in adopting HWSC measures that stopped weed seeds hitting the ground and, therefore, lowering the weed seedbank for long-term sustainability.

He said research had shown all HWSC measures commonly used in Australia tended to be equally effective and typically remove about 60-70pc of standing annual ryegrass and 70-80pc of wild radish seed, leading to about 55-60pc less weed germination the following year. 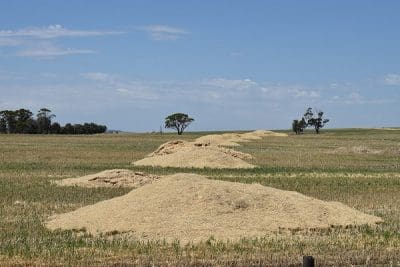 Chaff dumps can be grazed before residue is burned.

“If you do employ HWSC for enough years in a row, the seedbank is dramatically reduced and growers can get on top of the problem relatively fast,” he said.

“Chaff carts can be towed over every hectare of the farm every year and chaff dumps can be grazed before residue is burned, which can provide extra feed value for livestock.”

Mr Newman said to maximise the amount of weed seed captured and destroyed in a chaff cart system, his experience had found value in:

About 10-20pc of stubble residue is removed in a chaff cart system, compared to about 50pc where windrow burning is used.

This means there are significantly less nutrients taken out of paddocks where chaff carts are used – equating to about $2-2.50 per hectare in nutrient costs (mainly in replacing nitrogen and potassium and based on a three tonnes per hectare wheat crop), according to Mr Newman.

“This may be less where sheep are grazing chaff dumps and re-spreading residue across paddocks in droppings,” he said.

“This may seem more expensive than simply windrow burning, but the nutrient removal cost from windrow burning is significantly higher and burning whole paddocks is not ideal in many areas – especially in medium and high rainfall zones,” Mr Newman said.

“It is worth looking at all the HWSC controls available because windrow burning can be expensive when you consider the nutrient implications and potential problems with getting windrows to burn consistently across the whole farm.”