THE relatively new practice of chaff lining is proving to be one of the easiest and most cost-effective tactics for harvest weed seed control (HWSC) to reduce the weed seedbank, help conserve soil moisture during summer and slow the evolution of herbicide resistance. 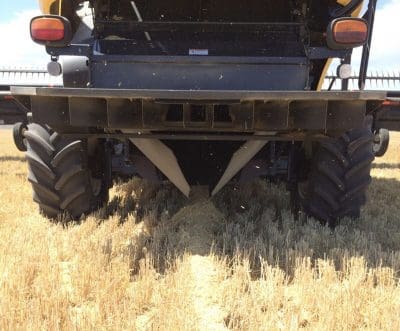 A plastic chute fitted to the harvester funnels the chaff containing the majority of weed seeds present into a narrow band in the middle of the CTF run. (Photo: Mic Fels)

“Weed seeds are concentrated in that zone and straw is spread as usual,” he said.

“The chaff line is not burned, but left on the soil surface for weed seeds to rot. Any plants that do emerge have to compete with each other in a narrow row, leaving the remainder of the subsequent crop area clean.

“The harvester needs to follow the same tracks each year, to make sure the chaff line is dropped on the old one, but this can be done even without using a full Controlled Traffic Farming (CTF) system.”

Mr Newman said many growers were making their own chaff chutes and some were using a baffle to optimise the number of weed seeds diverted to the chaff line.

Other growers were burning the chaff line by placing a conventional narrow windrow over the chaff line every few years. This is typically being done in a canola phase, when a hot and effective burn can be achieved, to destroy even more weed seeds and remove the chaff that has built up.

He said other common HWSC methods being used to reduce weed seedbanks included:

WeedSmart has a series of videos showing different methods of managing chaff during harvest, available on its website: https://weedsmart.org.au/setting-up-harvesters-to-capture-weed-seed-in-the-chaff/

There is also a case study featuring Esperance and Three Springs grain growers Mic and Marnie Fels, who have been using chaff lining for several years, at https://weedsmart.org.au/case-studies/fels-family-wa

An online course that explains HWSC tactics, including chaff lining, can be accessed at: http://www.diversityera.com/courses/harvest-weed-seed-control-101

For more information about Integrated Weed Management strategies, including options for harvest, go to the GRDC website at: https://grdc.com.au/resources-and-publications/iwmhub and Weedsmart: www.weedsmart.org.au