CLIMATE variability is largely to blame for the plateauing of wheat yields over the past 30 years, according to I.A. Watson Grains Research Centre director, professor Richard Trethowan. 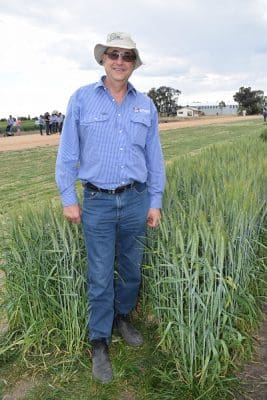 Addressing the centre’s annual field day at Narrabri in north-west NSW, professor Trethowan said there had been a big increase in wheat yield variability attributable to climate change over the past 30 years.

“This is the challenge that grain growers are facing. For us in Australia, as in other parts of the world, we are dealing with a much tougher situation,” he said.

Professor Trethowan said the stalling of wheat yield increases in the past three decades contrasted with the long run of productivity increase that was achieved through the middle decades of last century.

“There was a steady increase in wheat yields between 1930 and the mid-1980s. That can be attributed to many things such as increased mechanisation, better fertilisation, new and better genotypes, the introduction of semi-dwarf wheats. They led to a constant increase in yields,” he said.

“But, since that time, yields have plateaued. This has been observed in many parts of the world and is not unique to Australia.”

He said while plant breeders had continued to develop more productive lines, much of the advancement in production potential was being over-ridden by increased climate variability.

“If we look at the data more carefully, I would say plant breeders have been making progress. I can see underlying increases in yield potential, but we are not realising them in the longer term because of the climate variability,” he said.

“If we look at variability in yields, it is much greater over the last 30 years than it has been at any time in the past.”

Professor Trethowan said while farming conditions had become tougher in recent years, a positive was that farmers were adapting well to managing the variability.

“….plant breeders have been making progress. I can see underlying increases in yield potential, but we are not realising them in the longer term because of the climate variability.”

“A lot of farmers are a lot less sensitive now to climate shocks than they used to be because they are using technology wisely and they are learning to exploit summer moisture,” he said.

“They are using better management practices. It is all about managing moisture better.

“As a result, farmers are becoming more resilient.”

“In research, we also have to manage the variability. If we don’t do it we don’t end up with accurate results,” he said.

“Here at the I.A. Watson Research Centre much of our research is dealing with these issues – managing heat tolerance, managing water use efficiency, managing crown rot diseases – all these sorts of things. If we can lift the low points we will improve profitability in the longer term.”

He said it was a matter of applying balanced research with the aim of achieving sustainable profitability for the farming community.

“Three examples of managing variability we are doing here at the station include developing improved yield stability through high temperature tolerance, disease resistance and a more diversified farming system.”