Chickpea can mine phosphorus bound in soils

RESEARCH by The University of Western Australia (UWA) will help unlock phosphorus bound in soils, and improve crop production. 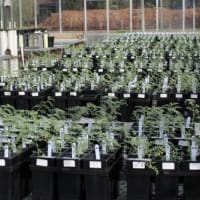 Over 250 chickpea genotypes with diverse genetic backgrounds were screened in glasshouses.

Phosphorus is an important plant macronutrient and its low availability in the soil is a major constraint to crop production worldwide.

Agricultural intensification and fertiliser application has led to a large amount of phosphorus being locked in the soil and contributes to environmental pollution.

Hackett Professor Kadambot Siddique, director of UWA’s Institute of Agriculture who led the research, said phosphorus was a finite resource and the team had been working on strategies to improve phosphorus-use efficiency.

The researchers screened over 250 chickpea genotypes with diverse genetic backgrounds from the world core collection to study the role of root morphology, physiology and biochemistry in acquiring phosphorus from the soil.

“Chickpea can mobilise the phosphorus bound in soils by exuding carboxylates such as malonate from the root system which are particularly important for phosphorus acquisition in low phosphorus conditions,” Professor Siddique said.

However, the institute’s research fellow Dr Jiayin Pang said measuring carboxylates from the soil was a laborious process making it difficult to screen a large number of varieties that had the trait.

“To make the screening process easier, we developed the world’s first tool that uses the matured leaf of crops to assess carboxylates in the rhizosheath,” Dr Pang said.

“We have shown for the first time that manganese concentration in mature leaves can be used as an easily measurable proxy for the assessment of belowground carboxylate-releasing processes in chickpea grown in soils with low phosphorus availability.”

In another study, the researchers found that leaf transpiration also played a role in phosphorus acquisition in chickpea grown in low-phosphorus sandy soils.

Professor Siddique said this research would have a big impact in global legume production through the development of more phosphorus efficient chickpea cultivars.

“Chickpea fits well into farming systems, where soil bound phosphorus can be mobilised and made available for succeeding cereal and oilseed crops,” Professor Siddique said.

“There was large genetic variation in root morphology and carboxylates release in the chickpea germplasm. These newly identified physiological traits will be useful in the screening of large populations and breeding improved chickpea cultivars.

“The information developed for chickpea may also be applied to other crops to improve their performance in low-phosphorus environments, thus benefiting global crop production through lower fertiliser input and reduced environmental impact.”

The findings were published in two papers:

‘Leaf transpiration plays a role in phosphorus acquisition among a large set of chickpea genotypes‘ in Plant Cell Environment.

‘The carboxylate-releasing phosphorus-mobilizing strategy can be proxied by foliar manganese concentration in a large set of chickpea germplasm under low phosphorus supply‘ in New Phytologist.