The combination of high inoculum levels from a big chickpea crop last year, record plantings this season and a series of disease-encouraging rainfall events has seen Ascochyta blight flare in many crops, putting pressure on fungicide supplies. 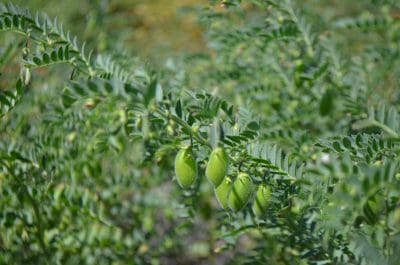 Fungicides to control disease in chickpeas are in short supply.

Growers are also on alert for the potential for Botrytis grey mould to hit after widespread rains last week and the likelihood of more falls later this week.

Dalby Rural Supplies head agronomist, Andrew Johnston, Dalby, Queensland, said the capacity to counter disease with fungicides was in question as all the formulations were in short supply across the nation.

“The Australian Pesticides and Veterinary Medicines Authority (APVMA), through Pulse Australia, has brought out a number of minor use (emergency) permits on some fungicides, but they are likely to run out soon too,” he said.

“Most growers, if they have an agronomist or consultant or deal with a supplier, should be aware of this and have systems in place, but supplies are getting tight.” 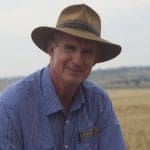 Pulse Australia northern region industry development officer, Paul McIntosh, Toowoomba, Qld, said conditions were favouring the development of fungal diseases in chickpeas both in the foliage and in the roots.

“The foliar diseases, Ascochyta and Botrytis, are certainly making their presence felt. Ascochyta is scattered through the whole growing region of desi chickpeas in Queensland and NSW. Some areas are worse than others and some have just isolated plants,” he said.

“We are waiting for Botrytis grey mould because it needs over 15 degrees average daytime temperatures, a big crop canopy and moist conditions in the canopy for it to strike. It is the sleeping bear at this stage and we hope it stays asleep.

“The potential for Phytophthora (root rot) is possible in situations where the soil is very wet. It can strike at any time during the plant’s life. It is a concern south of Moree. You can do nothing about Phytophthora, it is in the lap of the gods.”

Mr McIntosh said there were just over 1 million hectares of desi chickpeas planted this winter from central Queensland to central NSW, making it a record year by far.

“Whether they all survive or not is another thing because there has been some extremely wet weather. Chickpeas don’t like wet feet. How many hectares are we going to lose to drowning and disease?”

In addition to the desi plantings, there are about 60,000ha of kabuli chickpeas in Victoria, South Australia and Western Australia this season.

There have been reports in Victoria and South Australia of Ascochyta affecting chickpea varieties previously considered resistant to the disease.

Meanwhile, the heady prices of well over $1000 per ton for chickpeas at various times since the 2015 harvest have come off the pace, with last Friday’s bid price to growers by Glencore Grain for chickpeas delivered Mt McLaren GNC silo September/October at $724.25/t.

Nidera Australia pulse trader, Rob Brealey, told Grain Central the crops of yellow peas presently being grown around the world would compete directly with the pulse crops Australia would harvest this year.

“Not only are the monsoons in India pointing to a very good summer pigeon pea crop, but also output of yellow peas and chickpeas is looking promising from Canada, Russia and countries in North Africa,” he said.

AGT Foods CEO and Pulse Australia chairman, Peter Wilson, said the Australian field pea, when split, would substitute from time-to-time for a split pigeon pea in India because it looked and tasted sufficiently similar.

“The liquidity in yellow pea markets this year will spill over into desi chickpea markets. Prices for dhal are trending lower inevitably as the production cycle in the northern hemisphere reaches its conclusion.  In Canada for example, where harvest has had a rocky (wet) start, the grades and yields in pulses appear to be holding.”