FOR the first time in the history of chickpea production in eastern Australia, farmers will be going into the winter sowing season this year with their paddocks harbouring more inoculum of the pathogens that attack chickpeas than ever before, according to NSW Department of Primary Industries senior plant pathologist, Dr Kevin Moore. 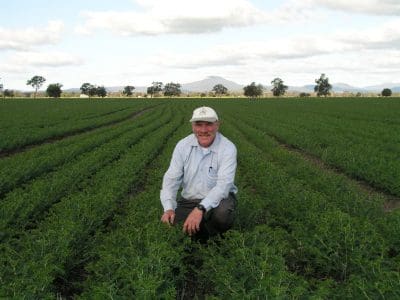 NSW DPI senior plant pathologist, Kevin Moore, warns that the risk of disease in chickpea crops this year is high unless growers adopt strategies to counter the threat.

Speaking at the Grains Research and Development Corporation (GRDC) Research Update in Goondiwindi, Qld, Dr Moore said conditions in 2016 had been very conducive to Ascochyta, Botrytis, Phytophthora and Sclerotinia diseases in chickpea crops throughout NSW and Queensland.

“Large amounts of inoculum of these pathogens will be available to infect 2017 chickpea crops. No-one should be thinking of putting chickpeas-on-chickpeas,” he said.

Dr Moore said Sclerotinia, which ran rampant in crops last year, was emerging as a serious disease of chickpeas.

“From mid-August 2016 to the end of September I started to get more phone calls about Sclerotinia in chickpeas than any other disease,” he said.

“The disease was very common in chickpea crops in north western NSW and southern Queensland due to high levels of canopy leaf wetness and favourable temperatures.”

To reduce the risk of Sclerotinia in 2017 chickpea crops, farmers should:

Similarly, Dr Moore said Ascochyta was a threatening disease of chickpeas which growers should take proactive action to control.

“If you don’t spray your chickpeas, irrespective of the variety, before the first post-emergent rainfall event, you will see the early symptoms of Ascochyta,” he said.

“We are advising that all chickpea crops, irrespective of variety, be given an early post-emergent fungicide spray.”

The main sources of Ascochyta inoculum are:

Strategies for reducing the risk of Asochyta include: