BUMPER crops combined with wet and windy weather at harvest is likely to leave more grain on the ground than usual over summer, fuelling a potential swell in mouse populations in Victoria and South Australia. 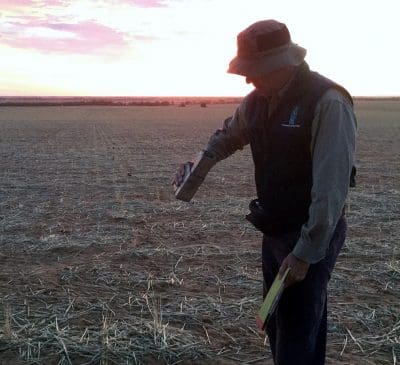 Grain growers in both states are advised to reduce the amount of residual food available for mice and to closely monitor numbers and activity.

CSIRO researcher, Steve Henry, who has been surveying mouse activity for a Grains Research and Development Corporation-funded project, said heavy rainfall during spring would further favour population build-up, especially in north-west Victoria where there was a high likelihood of an outbreak this autumn.

Mr Henry said while mouse abundance remained relatively low at monitoring sites in Victoria and SA, he had noted that mice had started breeding earlier than usual (in early August) in the Victorian Mallee and Adelaide Plains in SA.

“We expect numbers will increase over summer and autumn, particularly given a good supply of food and favourable weather conditions through summer. Growers should remain vigilant and act accordingly to prevent damage at sowing,” he said.

Mr Henry encourages growers and advisers to report and map mouse presence, absence and level of activity using MouseAlert (www.mousealert.org.au) so others can see the scale and extent of localised mouse activity.

MouseAlert also provides access to fact sheets about mouse control and forecasts of the likelihood for future high levels of mouse activity in each grain-growing region.

The GRDC-funded mouse monitoring project is a collaboration with CSIRO, NSW Department of Primary Industries and the Invasive Animals Cooperative Research Centre.

For information about monitoring mouse activity, contact Steve Henry from CSIRO on 0428 633844 or email [email protected].

Observations can also be directed to Mr Henry via Twitter, @MouseAlert. Information about mouse control is available via the MouseAlert website, www.mousealert.org.au, or the GRDC Fact Sheet, http://www.grdc.com.au/grdc-fs-mousecontrol.