THE Australian Senate’s vote last night to cut 70 gigalitres (Gl) of water available to users in the northern reaches of the Murray-Darling Basin has sparked the ire of agricultural bodies including the National Farmers Federation (NFF), Cotton Australia, NSW Farmers’ Association, the Queensland Farmers’ Federation and the National Irrigators’ Council. 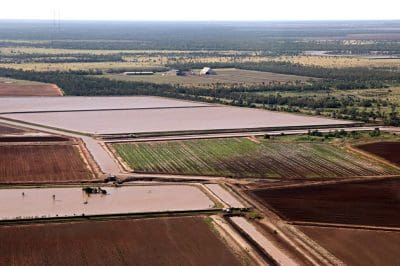 St George produces irrigated cotton and grapes in southwest Queensland, and is part of the Murray-Darling’s Northern Basin.

Greens Senator Sarah Hanson-Young moved the Disallowance Motion to overturn the Murray Darling Basin Authority’s (MDBA) Amendment recommendation for the 70Gl reduction in the Northern Basin’s Water Recovery target. It passed with support from the Australian Labor Party (ALP) and some crossbenchers.

The water in question will now not be available to users including cotton and grape irrigators from Warren in NSW to St George in Queensland.

The ALP and the Greens said they supported the motion based on concerns about irrigator theft of environmental water in northern NSW, and the health of the river system all the way to its mouth in South Australia.

NFF president, Fiona Simson, said the Senate’s decision was likely to destabilise the Murray Darling Basin Plan (MDBP) to the point of unravelling.

“Labor senators have issued a vote of no confidence in the plan and the significant work the MDBA and basin communities undertook in order to complete the Northern Basin Review,” Ms Simson said.

The plan was seen as an historic compromise between five basin states and territories, and as enjoying bipartisan support from the Coalition and the ALP.

NFF said the MDBP had already achieved 77 per cent of its water recovery target, and delivered environmental benefits across the basin, but yesterday’s vote would likely see the NSW and Victorian governments walk away from it.

“We risk going back to the bleak days of the water wars where it is each farmer, each state to themselves.”

Ms Simson said she hoped Labor would now engage with the Government to enable the Northern Basin Amendments, as proposed by the MDBA, to be brought before Parliament one last time.

“As it stands, the plan is on life support.”

Cotton Australia said the passing of the motion showed the Senate had abandoned Northern Basin communities.

“The Senate threw common-sense out the window and gave in to environmental extremism, while at the same time delivering economic and social uncertainty to communities in the Murray-Darling Basin,” Cotton Australian general manager, Michael Murray, said.

“And Labor, the architects of the review…has supported the Greens and thrown the bipartisan nature of the plan out the window.”

Mr Murray said modelling by the MDBA showed communities in the Northern Basin could expect to lose 180 jobs as a result of the reduced water available to irrigators.

“Perversely, the disallowance motion will result in one less environmental target being met, and has removed the incentive for the Commonwealth, NSW and Queensland Governments to invest in complementary measures to leverage even further gains for the environment.

“Perhaps even more importantly, we can now expect both the Victorian and NSW governments to withdraw their commitment to the Murray-Darling Basin Plan, as they had indicated they would over the past week.”

“Those responsible should be roundly condemned. This does nothing to help the environment and leaves an uncertain state of limbo for all concerned.”

Ms Hanson-Young said the Greens’ decision to move the motion was based on its belief the Murray-Darling Basin Plan was being undermined by “big corporate irrigators”.

“This is water that is paid for by Australian taxpayers, for the benefit of all Australians and the environment, not to be siphoned off by greedy cotton growers who have been at the centre of scandal after scandal upstream.

“There must now be an independent audit into where taxpayers’ money has gone and where the water is going, urgently.”

MDBA chief executive, Phillip Glyde, said he was disappointed by the Senate’s vote.

“The MDBA stands by the Northern Basin review process, which was based on the best available science and evidence, peer-reviewed by independent experts, and involved an extensive and comprehensive consultation over four years,” Mr Glyde said.

“I urge all parties to continue to work together in a spirit of consensus and co-operation to deliver the basin plan — this remains our nation’s best pathway for securing the environmental future of this vital shared resource and the communities that depend on it.”

Mr Glyde said work was already under way to address these issues through measures agreed to by the Queensland, NSW and Federal governments.

“The Parliament is still to consider the disallowance of amendments affecting the southern Basin.

“I hope that all parties will take into account the peer-reviewed science and evidence-based work of the MDBA when considering these amendments, and consider what is at stake.”