Cotton and cars spin a rich history for Toyota 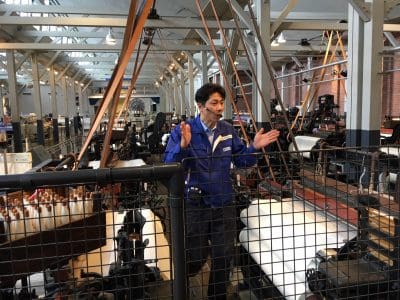 In adjacent Toyota City, you can find its factories, a concept and new-model showroom, global headquarters, the Toyota Memorial Hospital, Toyota Stadium and the Toyota Municipal Museum of Art, home to works from some of the big names in modern Japanese and western art.

Also in the suburbs is the Toyota Automobile Museum, and close to Nagoya’s city centre is the Toyota Commemorative Museum of Design and Innovation (TCMDI) where, alongside exhibits which take you through Toyota’s automotive history, is a startling insight into the cotton industry.

For that is where Toyota began.

In a building which once housed one of the company’s first cotton mills, TCMDI offers a clickety-clacking and whirring display of fibre processing.

It includes a huge machine which pulls apart a bale and turns lint fibres into sheets known as lap, and it shows how cotton was processed in the days of cottage industry, and steam and diesel power.

Using the latest models from Toyota’s Textile Machinery Division, it also shows how natural and man-made fibres are spun and woven today. 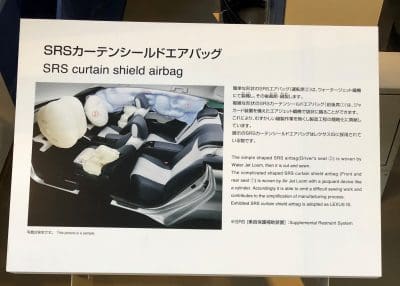 Airbag fabrics woven on Toyota machines are used in the company’s vehicles. How they are made is demonstrated at TCMDI. Photo: Henry Wells

It’s a progression that would probably delight one of Japan’s most revered inventors and Toyota founder Sakichi Toyoda.

Between 1890 and the 1920s, Toyoda-san patented several looms and associated machines used in spinning and weaving.

They prompted major advances in cotton mills across the globe, and helped to establish Japan as a force in textile manufacturing, and a long-term importer of cotton lint from origins including Australia.

Toyoda-san’s most marketable invention came in the 1920s and was the Type-G Automatic Loom.

It turned heads worldwide, and in 1929, UK company Platt Brothers paid Toyoda-san handsomely to hold the patent in countries other than Japan, China and the US, where Toyoda retained control.

The sale gave Sakichi Toyoda’s son Kiichiro Toyoda the funds to expand into the automotive industry and give US, European and Japanese-made models a run for their money in the local market.

In 1935, Toyoda built its prototype A1 passenger car and G1 truck, and the company’s first mass-produced passenger car, the AA, was released in 1936.

The company’s automotive division was born the following year, and brought the change from Toyoda to Toyota, which was seen as a more appealing marketing option.

Kiichiro’s grandson Akio Toyoda is currently the president of the Toyota Motor Corporation.

The 1940s saw Toyota concentrate on manufacturing vehicles for Japan’s war effort, and look to the US Jeep as inspiration for a new type of light truck.

By the 1950s, Toyota was manufacturing its first Land Cruiser for the US Army to use in the Korean War.

Australia started to import Land Cruisers in the same decade, with early models deployed in the building of the Snowy Mountains Scheme.

The Land Cruiser is Toyota’s longest-running series, and along with passenger vehicles and Daihatsu and Lexus models, is an important part of Toyota’s evolving range available globally.

The company’s forklifts, first produced in 1956, have been imported into Australia since 1968, and further the link between Toyota and agriculture in Australia and elsewhere.

I learnt to drive on a farm in a Toyota Stout, and now own my third Toyota.  I visited the Toyota Kaikan Museum and the TCMDI earlier this month with my family.

As one who has visited many Australian meatworks, flour mills, wool-topmaking plants and cotton gins in my 30 years in agricultural journalism, I was fascinated to see first-stage cotton processing for the first time.

If you are interested in cotton, TCMDI is well worth a visit.

Other Japanese automotive manufacturers run plant tours and have museums, and have equally interesting stories to tell.