THE escalation in trade tensions between the United States and China in recent days – with the US raising tariffs on Chinese goods and China responding with retaliatory measures – is driving volatility in cotton and soybean markets, according to Rabobank’s commodity analyst Charles Clack.

Mr Clack said “a prolonged trade war now appears likely” and warned that these tensions would have a knock-on effect for Australian producers.

“China’s response to the lift in US import tariffs was released overnight, increasing tariffs on US$60 billion of US imports. This is a direct retaliation to higher duties levied by the Trump administration last week, from 10 per cent to 25 per cent on US$200 billion worth of Chinese goods,” he said.

“While the 25 per cent US cotton duty was unchanged, the current turn of events will continue to disrupt short-term demand and trade flows, and could easily aggravate a downward trajectory in global economic growth.”

With China the largest single importer of US cotton, Mr Clack said traders were becoming increasingly anxious about US cotton demand.

And this, he said, was placing considerable pressure on global and US cotton prices – with international cotton prices (ICE #2) now at their lowest level since mid-2016 at around US65 cents/pound.

‘The slump in ICE #2 futures has driven prices lower here in Australia as well, with 2019 prices down by around A$40/bale to A$600/bale. But this fall is likely to be short-lived, since Chinese inquiry will continue to favour Australian cotton and support local basis,” he said.

As a ‘no-deal’ continues between the US and China, Mr Clack said the recent round of US new season cotton sales was expected to be gradually cancelled as China looked to firm up cotton supply from non-US origins – namely Brazil, West Africa, India and Australia.

“Additional tariffs will not hit goods already in transit, therefore providing both nations a few weeks’ grace before these new tariffs really start to hurt,” he said.

Away from the US-China trade situation, Mr Clack said Rabobank held a bearish view on global cotton prices into late-2019.

“A record Brazilian crop and the potential for a 14-year high in US production this season means global supplies are set to increase significantly. And this is against a backdrop of slowing global demand,” he said.

Mr Clack said early season forecasts suggested prices could dip locally to A$570/bale by the fourth quarter of 2019, assuming a no US-China trade deal was announced.

“But there are many unknowns to the outlook, including weather risks – namely during Brazilian picking and the US hurricane season, which could all considerably change the outlook,” he said.

Meanwhile, the latest report from the United States Department of Agriculture (USDA) predicts world cotton ending stocks for the 2019/20 marketing year will be down for the sixth consecutive year. 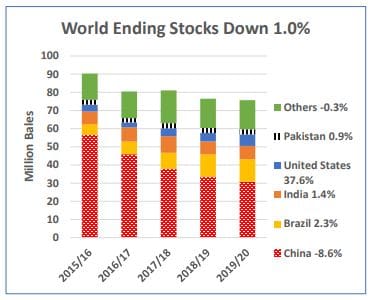 However, stocks outside of China will grow after declining in 2018/19 and reach a record of nearly 45 million bales.

Apart from China, ending stocks are forecast to increase in nearly all major producing and consuming countries as global production remains high relative to consumption due to Brazil’s record crops and the large increase in United States production.

In contrast, China’s ending stocks are forecast to fall for the fifth consecutive year and be less than half the level seen at the end of China’s reserve buying in 2014/15.

The USDA predicts flat production, continued reserve sales, and consumption growth in China will combine to work stocks down.

US stocks will rise sharply due to a dramatically larger forecast crop and continued restrictions on US exports to China. 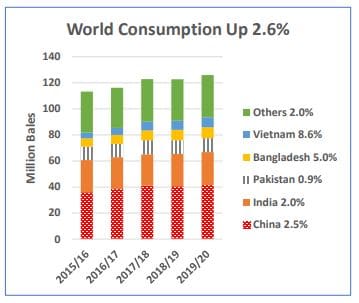 Global cotton production in 2019/20 is forecast by the USDA to be nearly six per cent higher.

A sharply higher US crop will provide well over half the higher production, with India accounting for most of the rest.

Production in the Southern Hemisphere will be down slightly as expansion in Brazil takes a breather after seeing nearly 40pc growth in 2018/19 and Australia continues to face serious water shortages.

The USDA predicts production in China will remain stable. 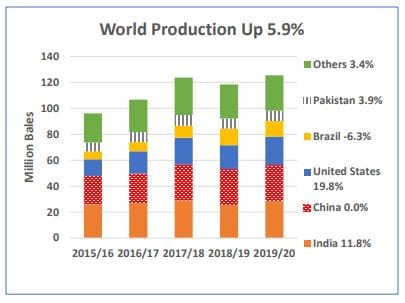 In 2019/20, for the fourth consecutive year world trade is expected to expand.

The USDA predicts both the US and Brazil will have large exportable supplies: a record late harvested 2018/19 Brazilian crop which will be followed shortly on the market by the sharply higher 2019/20 US crop.

The expanded world trade will be driven by higher use in importing countries.

Vietnam and Bangladesh imports will continue commensurate with their expansion in spinning.

China’s imports are nearly 30pc higher as a shift in its State Reserve policy – from reducing to rotating reserves – is bringing China back strongly into the global market.