Delta Agribusiness cotton consultant, Brett Cumberland, Trangie, said one of the crops he looked after last season was at Geurie, 35 kilometres east of Dubbo, on a property that had never grown the crop before. 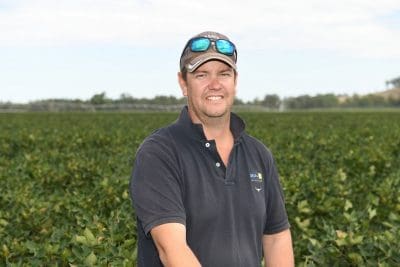 The cotton was grown by Rob, Cathy and Cheryl German on a property that had traditionally grown grain crops.

“I’m looking after the crop just to get them into the cotton industry,” he said.

“I’ve had experience managing farms and agronomy for a while so I’ve just been able to help them with land prep and fertiliser and obviously with the growing of the crop. It’s been a success to date.”

He said the area had been a corn/sorghum rotation and cotton was a breakaway from those types of crops.

“There has been a build-up of problematic grasses over the years so that was one reason and the other reason was profitability,” he said.

“There are certainly good opportunities there with cotton when it is done right.”

Mr Cumberland said he had been talking with the growers since the previous corn crop was harvested.

“….we’ll do at least three years of cotton back-to-back. Then we’ll look to fit back into a rotation with corn….”

“We changed planting configurations a little bit. We’ve gone out wider than they traditionally do with corn from 30 inch (76cm) to 40 inch (102cm) but really, other than that, it hasn’t been a huge jump.”

He said the water use through the season had been a little less than previous corn crops and there was also very little difference with nutrition.

The in-crop weed control of Roundup Ready herbicide with PLANTSHIELD to control a range of key weeds has been another positive moving to cotton.

“There is some assistance there and being able to go through it with Roundup through the season,” Mr Cumberland said.

“The crop at the end of the season was quite weed free but there certainly was some big pressure earlier on grasses but we’ve been able to control them.”

There were four applications of Roundup Ready herbicide and some Group A options to provide a different herbicide group to glyphosate.

“These farms haven’t seen a lot of Roundup through the summer for a long time so it is working well.”

He said the success of cotton last season means it will become a major crop on the property going forward.

“The plan is we’ll do at least three years of cotton back-to-back. Then we’ll look to fit back into a rotation with corn depending on what is happening at the time.

“We’ve probably demonstrated that we can grow cotton here successfully and certainly they’ve got a great track record of corn, so there’s no reason that won’t be a good fit going forward.”

Mr Cumberland said there were lots of farmers in the area who were interested in looking at cotton as an alternative crop.

“Other growers have been watching the crop over the fence since it started and I think everyone is fairly upbeat about it.”