GINNING has begun of this season’s first cotton crops in Central Queensland where Queensland Cotton’s Emerald gin whirred into life on Monday and went onto 24-hour shifts yesterday. 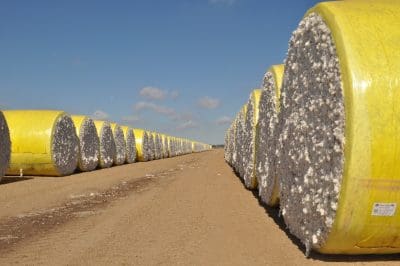 Queensland Cotton regional manager, Rick Jones, Emerald, said it was an early start to the ginning season due to the introduction of Bollgard III cotton varieties which had offered growers an earlier planting window and allowed them to put the first crops in in early August.

Mr Jones said the recent hot, dry conditions had been ideal for making good headway picking the new season crop with no delays from rain.

“We haven’t had any quality results back yet but it is nice white cotton with the dry pick. It is looking pretty good at this stage,” he said.

“It will probably be a bit bigger year than average. Half the crop was planted earlier and half later. The later crop has a fair way to go yet. It is looking alright at this stage but still has a long way to go. It is always a worry when it has been so dry for so long. It will need some rain from somewhere.”

Mr Jones said he expected the ginning season to run through to at least the end of June.

“We will have to wait and see how the season pans out as to whether there will still be some cotton being picked in July. We will probably have to gin for a few months and then have a month off in the middle,” he said.

Meanwhile, the growing regions further south in NSW and southern Queensland have suffered the paradox of a cool, slow start to the season, followed by blistering heatwaves through January and into February.

Cotton Seed Distributors (CSD) extension and development agronomist, James Quinn, Moree, NSW, said the crops in most districts were now at the stage of shutting down naturally. 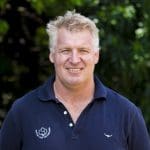 “From where we were in November to where we are now is chalk and cheese. There was a very cool start and a fair bit of insect pressure, but where the water was kept up and everything was done properly the crops don’t look too bad. It came along in leaps and bounds since then,” he said.

But Mr Quinn said the relentless heatwave conditions of recent weeks would take their toll.

“The implications are that the later set bolls could be affected and in the worst-case scenario they drop off. The other problem is the plant is not functioning at its optimum rate and is not concentrating its energy into putting weight into the bolls,” he said.

Mr Quinn said the impact of the extreme heat had been compounded by the lack of any significant rain through the growing season.

“The lack of rain has meant growers have had to change their irrigation scheduling and their water budgets have been torn up about seven times,” he said.

“We were blessed with fantastic conditions the last two years but we have had a reality check this year.

“While the crop still looks good, the yields probably aren’t going to be as high as last year. I think we will go back to what we had three years ago of 11 to 12 bales/hectare across the industry.

“There will be growers who will still do well and others who have run out of water who are going to find it hard.”

YIELD and quality can be adversely affected by periods of extreme heat (daily maximum temperatures greater than about 35ºC).

High temperatures during the day or night will reduce yield by limiting the availability of assimilates to support fruit growth causing shedding of squares and young bolls and lowering the number of seeds set per boll.

This in turn may cause crops to grow rank following the stress. Extremely hot temperatures at flowering may also cause ‘parrot beaking’ and during early boll growth may lead to boll death (sometimes called ‘cavitation’ or boll freeze). These symptoms can also contribute to loss of demand by fruit for assimilates. Fibre quality can also be affected by heat stress reducing fibre length and increasing micronaire.

The consequences of hot conditions for yield and quality are exaggerated if water stress also occurs during these periods.

Symptoms of well-water watered cotton that has encountered heat stress may include one or more of the following: