THE Cotton Research and Development Corporation (CRDC) is calling on growers to be a part of a soil compaction survey to assess the impact of round bale pickers. Cotton roots growing at right angles instead of a single tap root, due to encountering a compacted zone beneath the plant line.

CSIRO’s Dr Michael Braunack, the University of Southern Queensland’s Dr John McLean-Bennett and CottonInfo regional extension officers are looking to engage with growers and contractors over coming months on the issue of soil compaction due, in the main, to cotton picker traffic.

“We want to know whether it is an issue or not, and if so, what, if anything, are individuals doing to manage it?” Dr Braunack said.

“If it is an issue, we’d like to know what strategies being used to manage the problem, what has worked and what has not.”

The responses and information will be used to gain a picture of the issue right across the industry and inform further research priorities.

The researchers will collate the survey information from growers in their specific regions, through workshops and one-on-one engagement with individual growers.

This survey follows research undertaken by Dr Braunack and others into the effect on compaction with the advent of round bale pickers which, weighing in at around 36 tonnes, are significantly heavier than their conventional predecessors.

“In our research we measured soil strength profiles, which are an indicator of compaction, before and after traffic by a JD7760 as part of our initial survey of changes due to picker traffic,” he said.

“The results can be seen (Figure 1) in the increased red areas, indicating a higher soil strength, which will restrict root growth. The less-compacted green area indicates where roots can grow without too much trouble.” 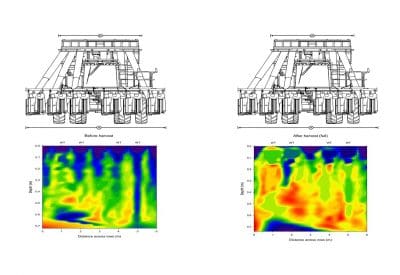 Figure 1: Soil strength profiles researchers measured before and after traffic by a JD7760 picker as part of their initial survey of changes due to picker traffic. The increased red areas indicate a higher soil strength, which will restrict root growth. The green area indicates where roots can grow without too much trouble. The measurements were taken at the same soil moisture content so the comparison between the two is valid.

Research undertaken by Dr McLean-Bennett has found the best method to deal with heavy machines is to avoid unnecessary traffic by implementing a controlled traffic farming (CTF) approach.

“Modifying to true CTF in Australia should be considered the best management practice; indeed a number of growers have demonstrated the benefits of this approach,” he said.

“A true CTF system was shown to better protect soil water infiltration in our experiments undertaken at Warren in NSW.

“A wheat crop was able to access moisture to 80 centimetres after two seasons of cotton in the CTF system using a JD7760 modified for CTF, but in the unmodified JD7760 system, the crop could not access water below 40cm due to compaction.

“The JD7760 has dual wheels on the front for increased machine stability, yet poses issues in the field in terms of compaction due to high axle loads.”

True CTF is where all wheel tracks are the same width and equipment working widths are multiples of each other; so either 1:2 or 1:3 and so on.

To modify a JD7760 to CTF one set of duals at the front are removed, and the front axle is modified to the same width as the rear axle.

Finally, to manage compaction, incorporation of rotation crops that improve structure with a true-CTF system should see growers realise the full potential of their soil resource.”

Dr McLean-Bennett’s research on the impact of compaction and CTF is available from the Inside Cotton website: www.insidecotton.com

This story first appeared in the winter edition of CRDC’s Spotlight magazine,  http://www.crdc.com.au/publications/spotlight-magazine-winter-2017