PICKING kicked off this week on the first of this season’s cotton crops in Central Queensland (CQ), marking an early start to a harvest program that is set to become the ‘norm’ following the introduction of the new Bollgard III varieties this season. 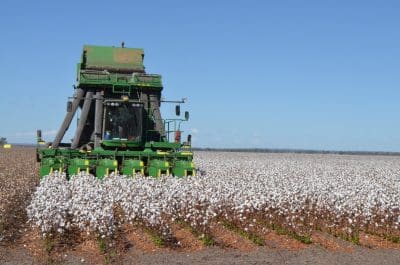 Australia’s 2017 cotton harvest is underway with pickers moving through the first crops in Central Queensland.

CSD extension and development agronomist, Sam Lee, said over the past 10-15 years this would be the earliest picking in CQ.

“It is basically due to the new Bollgard III technology which has allowed the cotton planting window to be opened up. Before, growers were restricted to a September 15 to November 30 planting window. But they are now able to plant cotton from August 1 to December 31,” he said.

Mr Lee said the wider planting window had led to growers having the option of sowing an early plant or late plant crop.

“There has been a real split in the planting in CQ this year with quite a bit of cotton planted in early August, some scattered throughout September/October, then quite a bit in late November/December that was double-cropped from winter crops,” he said.

Consequently, the most advanced crops are ready to pick while the later crops are just starting flowering and will be months away from harvest.

Mr Lee said the irrigated cotton crops in CQ had copped hot conditions through the middle of summer and had early insect pressure, as had been the case right across the industry this season. 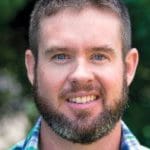 “There was quite low fruit retention early on. But what I am seeing in an early and late (sown) trial at Emerald is the early-planted trial is looking good at this stage. It will probably be picked late next week,” he said.

Mr Lee said with dryland crops, there were small pockets that were looking reasonable, but in those areas that didn’t receive much rainfall through the summer the crops “aren’t looking the greatest”.

“The dryland plant in CQ was a little bit greater than normal. It had the potential to be quite a large dryland year and there was a lot of country prepared for dryland north of Emerald around Capella and Clermont, but they just didn’t get the rain,” he said.

“But there are areas around Springsure that haven’t planted dryland cotton for quite a while and there is a reasonable amount gone in there.”

Bollgard III, which was approved last year and widely grown for the first time this season, is the third version of genetically-modified, insect-resistant cotton developed by Monsanto.

It follows on from the successful Ingard (introduced into Australia in 1996) and Bollgard II (introduced 2004).

In addition to the Bt proteins found in Bollgard II, Cry1Ac and Cry2Ab, Bollgard III contains a third protein, Vip3A.

The addition of the third protein increases the sustainability of the technology as it becomes increasingly difficult for cotton’s main pest, heliothis, to develop resistance to any of the Bt proteins.