WORLD cotton production in 2016-17 is projected to rise by 8 per cent to 22.8 million tons, which may put pressure on cotton prices in the latter half of the ongoing 2016-17 season, according to the latest forecast from the International Cotton Advisory Committee (ICAC) Secretariat. 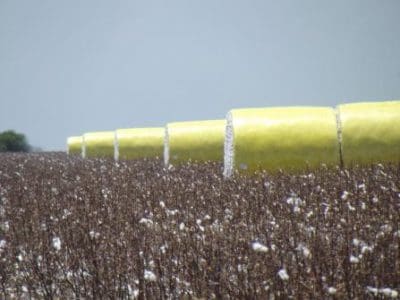 The current season started with a large shrinkage in stocks, particularly from countries in the Southern Hemisphere, which saw ending stocks in 2015-16 fall by 21pc to 1.6MT, the lowest since 2009-10.

The shortage in supply has carried through the first few months of the 2016-17 season, as the bulk of the crop was still being harvested, keeping prices firm.

The Secretariat forecasts that the season-average Cotlook A Index in 2016/17 will range between 66 and 83 cents/lb, with a midpoint of 74c/lb, which would be 4c/lb higher than last season.

With the exception of China, cotton production is projected higher in the top five producing countries.

India’s cotton production is forecast to increase by 4pc to just under 6MT, making it the world’s largest producer.

Production in the United States could rise by 28pc to 3.6MT while production in Pakistan recovers by 20pc to 1.8MT as efforts to prevent the re-emergence of pink bollworm have been effective.

Additionally, cotton production in the Southern Hemisphere, primarily Brazil and Australia, is expected to rise by 21pc to 2.8MT, which could put pressure on prices through the end of 2016/17 to the start of the next season as both countries are also large exporters.

Production in Brazil, the world’s fifth largest producer and largest in the Southern Hemisphere, is forecast to increase by 10pc to 1.4MT.

In Australia, production could grow by 64pc to 1MT due to expanded plantings as farmers were encouraged by high prices and better water availability.

World cotton consumption is likely to remain stable at 24.1MT. While prices for polyester, the main competing fibre, have risen in recent weeks, they still remain well below international cotton prices, making it unlikely that cotton mill use will expand this season unless polyester prices continue to rise.

China’s consumption is expected to remain stable at 7.4MT, making it the largest consumer.

However, mill use in India is projected to decline by 1pc to 5.2MT while mill use in Pakistan is likely to remain stable at 2.3MT.

Ongoing uncertainty in Turkey and competition from lower-priced cotton yarn imports could lead to a 3pc decline in mill use to 1.45MT.

However, cotton consumption is forecast to grow by 5pc to 1.3MT in Bangladesh and 13pc to 1.1MT in Vietnam.

Given that most large cotton-consuming countries depend at least in part on imported cotton, trends in consumption are mirrored in the top importing countries.

Bangladesh is forecast to increase its imports by 1pc to 1.4MT, making it the largest importer in 2016/17, and Vietnam’s imports are projected to rise by 19pc to just under 1.2 million tons.

However, Turkey’s imports are expected to fall by 1pc to 911,000t as falling mill use and higher production in 2016/17 limit demand.

Substantial increases in exports are likely in countries with larger exportable surpluses and strong demand in international markets, such the United States and Australia, which are expected to be the first and third largest exporters in 2016/17. 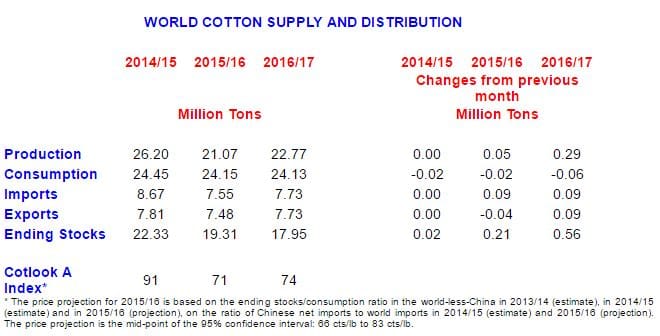