THE high cotton prices that have prevailed in 2016/17 are expected to encourage farmers around the world to expand the area under cotton by five per cent to 30.8 million hectares (Mha) in 2017/18, according to the International Cotton Advisory Committee (ICAC). 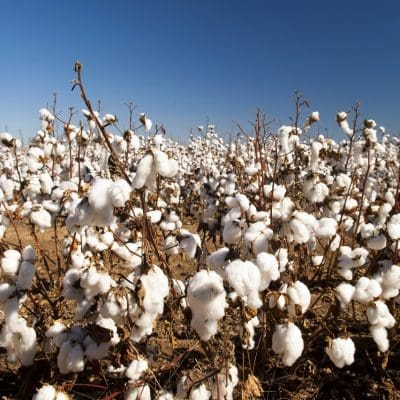 The ICAC forecasts India’s cotton area will increase by 7pc to 11.3Mha in 2017/18 as farmers are encouraged by better returns due to high cotton prices and improved yields in 2016/17.

Assuming yield is similar to the five-year average, production could increase by 3pc to just under six million tonnes (Mt).

After contracting in the last five seasons, the ICAC expects China’s cotton area may expand by 3pc to 2.9Mha due to the stable cotton policy and high cotton prices.

Production in China is expected to rise by 1pc to 4.8Mt, the first increase in five seasons.

Farmers in the United States are forecast to expand harvested cotton area by 12pc to 4.3Mha, and assuming a yield of 938kg/ha, production could grow by 8pc to 4Mt.

Unlike the other top cotton producers, area in Uzbekistan is expected to contract by 4pc to 1.2Mha in accordance with government plans to reduce areas where yields are low, and use them for other agricultural products.

However, plentiful soil moisture may improve the average yield by 1pc to 638kg/ha, which will limit the loss in output. Uzbekistan’s cotton production is projected to decline by 2pc to 770,000t.

Anticipating falling cotton prices in early 2017/18, cotton area expansion may be more limited for producing countries in the Southern Hemisphere.

Production in Brazil is projected to reach 1.4Mt while Australia’s production is forecast to rise by 4pc to 1Mt. 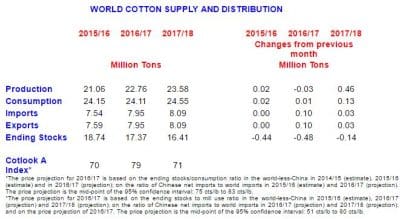 World cotton mill use is expected to surpass world production for the third consecutive season in 2017/18.

World consumption is projected to increase by 2pc to 24.6Mt as world economic growth recovers in 2017 and 2018.

Mill use in China is forecast to increase by 1pc to 7.7Mt, accounting for 30pc of world cotton consumption.

After decreasing by 3pc to 5.1Mt in 2016/17, India’s consumption is forecast to recover by 2pc to 5.2Mt due to competitive prices for its cotton yarn products, expanding capacity and the resolution of the consequences of demonetization.

Mill use in Pakistan may grow by 1pc to 2.3Mt due to new incentives for textile exports offered by the government.

Bangladesh’s cotton consumption is projected to expand by 5pc to 1.5Mt, making it the fourth largest in 2017/18.

World cotton trade is projected up by 5pc to 7.9Mt in 2016/17, after declines during the previous three seasons.