A SPATE of herbicide spray drift incidents in New South Wales and Queensland over summer has caused widespread crop damage and prompted pleas by authorities and grower bodies for operators to strictly adhere to application regulations. 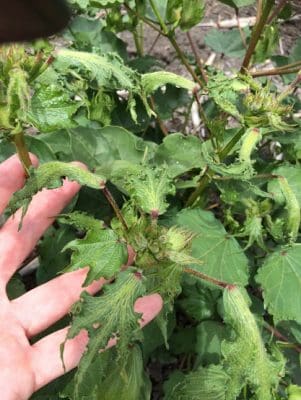 Many of the incidents have occurred mid to late in the growing season, including a major event at Walgett in north-west NSW at Christmas that affected 10 farms and damaged more than 5000 hectares of cotton.

Cotton Australia regional manager for the Darling Downs, Mary O’Brien, said there had been significant areas of spray drift damage to cotton throughout the growing areas this season, but the problem wasn’t confined to cotton crops.

“There has been glyphosate damage to young sorghum prior to Christmas in November/December; there are other crops like tomatoes that have been damaged,” she said.

Spray drift has been a recurring problem for the industry, with each season presenting different scenarios for growers.

The occurrence of many incidents late in the growing season this year has limited the potential for affected crops to recover and fulfil yield potential.

Ms O’Brien said 2015/16 was a season when there had been a lot of spray drift damage, but the majority of it was early season damage.

“That meant there was enough time and opportunity in some areas for people to grow the crop through. It wasn’t at the full fruiting stage,” she said.

By contrast, last season (2016/17) when there was a lot of early insect pressure and not much weed pressure until just before Christmas, the majority of drift reported was in January/February.

“So, there was mid to late season damage which leaves less opportunity for the crop to recover. There were also massive heat waves and ridiculous temperatures and no rain,” she said.

“We have seen the same thing this season with a mid to late season pattern of damage.

“That is particularly disappointing when it happens at that stage because people have invested a significant amount of money and water in growing the crop. If the damage is early in the season they have the opportunity to grow the crop out, but once it gets to mid-January it limits the choices.”

“Sometimes the crop can grow out of it. It is not often a total loss. But it takes time to recover, the crop might require another watering. And if it does recover it probably won’t realise its full yield potential,” he said.

Mr Murray said most of the incidents of spray drift damage were likely to have been caused by operators spraying under temperature inversion conditions rather than spray drifting directly from a neighbour’s farm.

Under surface temperature inversion conditions, which usually occur at night, the potential for spray drift is high because winds can move airborne pesticide droplets away from the target, sometimes over long distances.

Consequently, it is often very difficult to pinpoint the source of the problem.

Mr Murray said while there had been calls for spraying legislation to be tightened, the best solution was for everyone to take extra care and follow the guidelines on safe spraying conditions.

“Unfortunately, in summer time the opportunities to spray at night are extremely limited because it is likely to be under inversion conditions. And during the day, timing can be limited. But at the end of the day, if people want to continue to use this product they are legally obliged by the label to apply it correctly and safely,” he said.

Ms O’Brien said the key piece of advice was for growers to learn how to tell when there was an inversion.

“There have been people spraying in inversion conditions despite the abundant information that is out there,” she said.

“The areas we are seeing with the massive damage are areas where growers are allowed to use low-volatile formulations.”