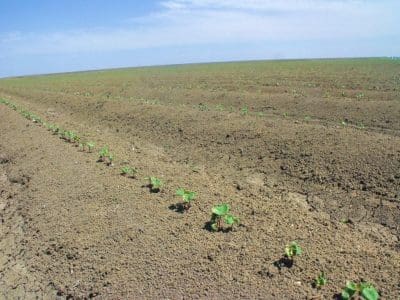 Some areas of the fledgling Southern Queensland cotton crop will require replanting following a severe and extended cold snap through October.

The month brought more than 10 days with minimum temperatures below five degrees Celsius, including some frosts.

Since then daytime temperatures soared to over 30 degrees, bringing hot winds which have dried out seedbeds, creating prime conditions for seedling disease.

Initial reports from paddocks in the past week suggested large areas would have to be replanted.

However, after talking to many growers in the region in the last few days, Cotton Australia’s Darling Downs regional manager Mary O’Brien said it now appears the replanting requirement may not be as high as previously thought.

She said most growers would wait for another week to 10 days before deciding if a replant will be required.

A number of growers have bought seed in case it will be needed.

“A small percentage will be replanted, and other areas will be decided as we go along,” she said.

A wetter than average winter inspired many growers to plant cotton earlier than usual in September this year.

A large number of dryland growers also opted to grow cotton for the first time, attracted by the favourable outlook for cotton prices compared to sorghum, and the introduction of the advanced insect-resistant Bolgard III technology this year,, which reduces refuge crop requirements.

Cotton Australia estimates that the area now planted to dryland cotton on the Darling Downs (spanning from Toowoomba to the Western Downs and north to the Burnett) is 52,000 hectares, a massive jump on region’s the 3,200ha dryland crop last year.

About 85 percent of the Downs cotton crop has now been planted, with most sown in September prior to the onset of longer than usual cold spell in October.

Mrs O’Brien said many crops had a good germination but seedlings had stalled at the cotyledon stage due to the conditions.

Small areas had succumbed to seedling disease which was causing the requirement for replanting.

Both irrigated and dryland crops have been affected.

However, despite the setback, some crops were performing well, she said.

“Some of the really early planted crops are doing well, they got up and away from the ground before this cold snap.

“Up in the South Burnett they are looking great, with crops up to the two to four leaf stage, it is bouncing away.

“The haven’t really had the severe cold other areas have had.”

With the cold weather now hopefully gone and warm temperatures returning, replanted crops would still have time to catch up, she said.

Of all the cotton growing regions in Australia the Darling Downs has the largest potential for dryland crops, which can bring huge variations in areas planted from year to year.

As a result the area can range from having about one quarter of Australian cotton growers in any season to over half, depending on the number of farmers who decide to plant dryland cotton from year to year.

“A lot of sorghum has ben pretty slow to come up and I know some growers are saying they are going to have to replant a bit of sorghum,” he said.

“A few growers are talking about having some patchy strike on some of their sorghum, not all of it, but it is just a symptom those really cold mornings we had there a few day ago.”