THE two winners of the 2020–21 FastStart Cotton Establishment Awards pushed themselves outside of their comfort zone, drawing on the latest tools, techniques and advice with outstanding results.

The awards are conducted by CSD and Syngenta Australia as an extension of their research and development program, FastStart Cotton, which celebrated its 10th anniversary last year.

Mr Brimblecombe’s Forest Hill farm had not produced a single cotton plant in 21 years, prior to this season.

Despite the long hiatus, he said he had plenty of knowledge at his fingertips through FastStart, which resulted in a PUI (planter uniformity index) of 0.05 and 81.8 per cent establishment.

“The FastStart cotton program gave us the tools and advice we needed to give our crop the best chance of success,” Mr Brimbelcombe said.

Planter uniformity and evenness of the emerging crop are key criteria that strongly align with FastStart principles.

Growers are encouraged to adjust their row configuration and seeding rates for optimum seedling performance as a foundation for optimum efficiency and eventually yield.

“We planted on minimal moisture and while we got some very welcome post plant rain the crop hasn’t had a lot of follow-up and has struggled a little. I’m happy that we went with a single skip option,” Mr Brimblecombe said.

While he said there was some “luck and patience” involved, he credited CSD extension and development agronomist Chris Barry, and the agronomy team at CGS – including John Ash – for their outstanding knowledge and support. 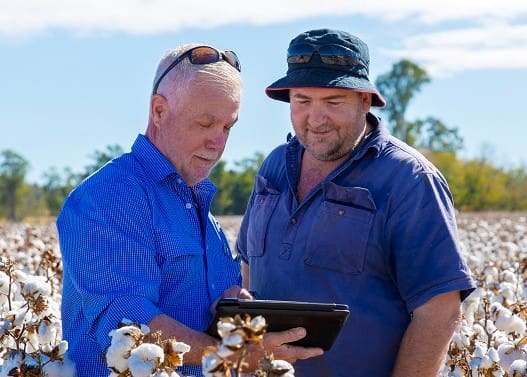 Due to cotton’s cold intolerance, Mr Cowley made good use of the FastStart Soil Temperature Network and Traffic Light System before hitching up the Norseman planter.

“No matter what you’re growing, seedling establishment should be at the top of everyone’s agenda,” he said.

Mr Cowley embraced an added degree of difficulty, opting to plant his crop into a 1.5-metre tall multi-species cover crop.

A firm believer in “healthy soils being productive soils”, he utilised sequestered nitrogen and only a single liquid fertiliser application at planting.

“It’s not an easy thing to do to take generations of farming knowledge and put it aside to try something new,” he said

CSD general manager – growth and development, James Quinn, said achieving even establishment of a cotton crop wasn’t easy but it was critical in getting the crop off to a good start.

“This can influence the development of the crop and ultimately, yield and quality at picking,” he said.

The awards support growers in their continuous work to improve the production of their crops. Past winners have participated in a study tour of agricultural enterprises within the Ord River irrigation system. Organisers remain hopefully the trip could go ahead after COVID-19 forced them into a hiatus last year.

“There are many growers out there doing a fantastic job of optimising their seedling establishment through the utilisation of the technology and tools that FastStart is providing,” Syngenta Seedcare technical services lead, Sean Roberts, said.

“We want to recognise and celebrate this as best practice cotton farming. The Awards are a great way of doing this, as well as sharing what best practice looks like with other growers.”

FastStart Cotton research and development is funded through the proceeds of each bag of seed sold through CSD, which comes with the added protection of Syngenta Seedcare™ treatments.