US cotton exports set to be second highest on record

COTTON exports from the United States through 11 months of the 2016/17 marketing year are running more than 70 per cent ahead of year-ago levels, keeping them on track to reach the forecast of 14.5 million bales, the second highest level on record.

The latest United States Department of Agriculture (USDA) cotton reports says the increase in exports is widely distributed across markets, with exports up in 20 of the 25 largest US markets. 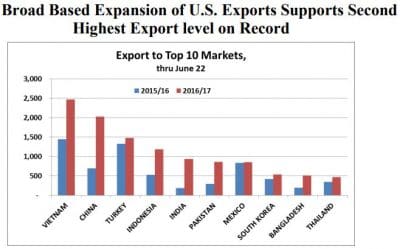 Among the top 10 markets, only Mexico and Turkey have not exhibited robust growth.

Mexico’s mill use has been declining and the US has a pre-existing near-100pc share of the import market, therefore export growth to Mexico is limited.

Export growth in Turkey has been constrained by a much larger domestic crop which has reduced overall import demand by over 25pc.

Globally, strong US exports reflect improved market share in many markets, as the global consumption recovery has only modestly raised world import demand.

Vietnam is likely to remain the largest market for US cotton with shipments up 70pc as import demand continues to expand and the already strong US market share grows, perhaps reaching 60pc this season.

Continuing expansion of Vietnam’s mill use has supported extremely robust sales this year.

Shipments have nearly tripled to China, India, Indonesia, and Pakistan as US cotton has captured a greater market share alongside substantial expansion of total imports in these countries.

With exports to China up by nearly 200pc, it is now set to be the second largest US market, after having fallen to fifth place in 2015/16, its lowest ranking in 15 years.

Higher beginning stocks are also forecast, but these are partially offset by higher consumption; global ending stocks are forecast higher.

The US balance sheet has area and production down, resulting in lower ending stocks.

The US season-average farm price forecast is US3 cents lower at US61c/pound.

For 2016/17, estimates of global production and use are raised.

The increase in production is greater than that for consumption, thus ending stocks are forecast up.