IN its first estimate of the 2017/18 crop, the International Cotton Advisory Committee (ICAC) Secretariat predicts that world cotton output will rise by two per cent to 23.4 million tonnes (Mt).

The expansion is the result of an increase in planted area, which is expected to grow by 5pc to 30.6 million hectares after two seasons of contraction. 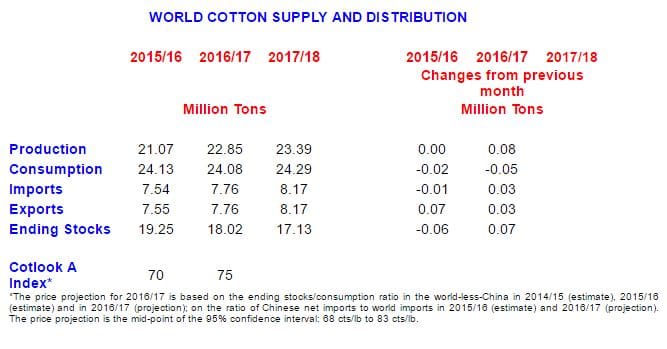 In 2016/17, the cotton area in India, the largest cotton-producing country, fell by 12pc to 10.5 million ha due to competition from food crops.

In 2017/18, India’s area is forecast to recover by 7pc to 11.2 million ha as firm domestic cotton prices and less attractive prices for competing crops attract more farmers to cotton.

Assuming a national average yield of 530kg/ha, production will increase by 1pc to 6Mt.

However, output has not fallen as quickly due to the fact that the share of cotton grown in Xinjiang, which has higher yields than other producing regions in China, has increased considerably.

Following a season of higher than expected yields and firm cotton prices, cotton area in the United States is expected to expand by 10pc to 4.2 million ha in 2017/18.

Pakistan’s cotton area is forecast to increase by 3pc to 2.6 million ha, and assuming a yield of 739kg/ha, Pakistan’s production could reach 1.9Mt.

World cotton mill use is expected to remain stable at 24.1Mt in 2016/17 as high cotton prices discouraged growth in demand.

Mill use in the top three consuming countries, China, India, and Pakistan, is expected to remain unchanged from 2016/17.

Bangladesh is likely to maintain its position as the world’s largest importer of cotton with its volume forecast to rise by 5pc to 1.5Mt.

Vietnam’s import volume is projected to grow by 8pc to 1.3Mt.

Given the large exportable surplus and strong demand, exports from the US are anticipated to rise by 17pc to 3.2Mt in 2017/18.