IT’S BEEN “government report week” as USDA and ABARES released updates for their relevant papers on crop production.

The results have sparked up markets as the July CBOT wheat contract traded at US52 cents/bushel weekly range (A$27/t) and ended closing lower at 499.50c/bu.

Despite repeated claims, no one believes the numbers the USDA produce, and the response to the World Agricultural Supply and Demand Estimates (WASDE) may suggest otherwise as the bullish numbers initially sent CBOT wheat and corn higher by the equivalent of A$11/t and $5/t respectively.

It was their production estimate of the world’s largest wheat exporter that provided the story, with the WASDE report revising Russia’s new crop wheat production lower.

But why did the market believe it?

Only 12 months earlier in their June 2017 report, USDA cited the Russian crop at 69Mt, then were forced by record export pace to revise higher for subsequent reports to reach 85Mt where they stand today.

Maybe we are a little harsh on the USDA, but given the US145c/bu down move from July to September 2017, this suggests they weren’t the only one to get Russia wrong, and it’s highly unlikely we will see another 85Mt crop as the conditions have not been near as kind as 2017.

Regardless, when it comes to Russian wheat there are only a few things that are clear: they are getting better every year at growing it, and no one knows how much better until at least after their harvest.

One thing, USDA didn’t bother touching on Australian wheat production. However, we only needed to wait a few hours to see ABARES early call on our national production with scores of 21.9Mt for wheat, barley 9.2Mt, and canola 3.1Mt.

Given the planting window hasn’t even closed, I would think it’s fair to say that this is not really a forecast, but more an early guess and few in the trade will be holding ABARES to their number.

If you’re bullish, or a farmer, you could easily say these numbers are too high as much of the crop has been planted in sub-par conditions and the outlook is poor.

Conversely, if you’re bearish or a consumer, you may have read the report and said: “plenty of water to go under the bridge, hopefully!”.

There is enough evidence for both the bulls and bears to support these arguments – the Bureau of Meteorology (BOM) joined in at the government report party with their climate outlook and favoured below average rainfall and above average temperatures for most of our cropping belts, only giving WA a greater than 50 per cent chance of average rainfall.

Chart 1 is from the BOM June 2018 climate outlook and has less than 50pc chance of median rainfall for most of Australia. 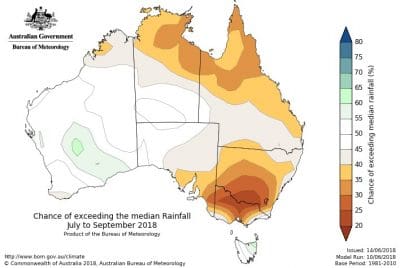 Chart 1: Chance of exceeding median rainfall is lower in eastern Australia July to September 2018 than it was last year. (Source: BOM) 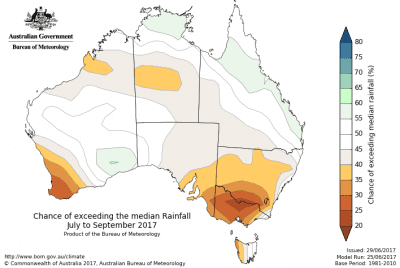 However, just like the USDA reports of Russian production forecast, those more optimistic on Australia can say we’ve been here before.

The BOM June Climate outlook for 2017 is comparable to this year’s forecast for the east coast, worse for the west coast, yet last year we still managed a 21Mt crop.

In that time some areas did it very tough, others had a favourable run home, but more importantly, like the Russian farmers every year, Australia’s farmers get better at growing their crops.

All the consumers along Australia’s seaboard or in the food bowl of Asia who are now left anxiously watching on should be thankful for that.

The COFCO market report this week was written by Tim Murray, wheat trader for COFCO International Australia in Melbourne.