Crops at risk of being hobbled by blackleg disease

CANOLA growers in Western Australia’s southern region and parts of the central region have been warned to take evasive action to protect their crops from the fungal disease blackleg, with an elevated risk of infection and the resistance level of several varieties downgraded. 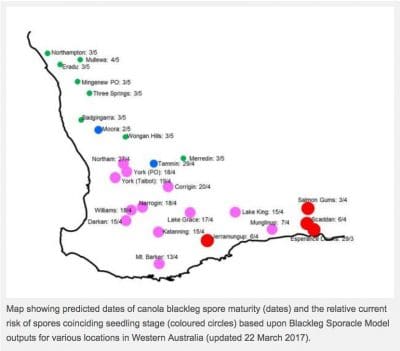 The Department of Agriculture and Food’s (DAFWA) online Blackleg Sporacle model is predicting early spore showers from canola stubble in parts of these regions, which could infect canola seedlings and cause losses of up to 50 per cent in unprotected crops.

“Depending on rainfall over the next week or so, fungal fruiting bodies may mature earlier in Narrogin, Williams, York and Northam, producing an above average blackleg risk.

“In the Moora, Tammin and Merredin districts spores are still immature making the risk low, while the risk is very low at locations near Wongan Hills, Badgingarra and in the northern region, as the spore maturation process has not commenced.”

Blackleg Sporacle was developed by the department to predict the date when fruiting body maturity is achieved, after which spore showers occur.

Canola growers are encouraged to consult Blackleg Sporacle weekly, as predictions could change from week to week depending on rainfall conditions.

Dr Khangura also cautioned growers the blackleg disease resistance rating for several triazine tolerant, Clearfield and Roundup Ready varieties had been downgraded, due to poor performance in Australian nurseries in 2016.

“Growers are urged to take extra care to manage blackleg if planting these and other susceptible varieties this year, such as sowing into paddocks that have not been sown to canola for the past three years, sowing 500 metres from canola residues, applying a fungicide to seed dressing and fertiliser and budgeting for a foliar treatment.”

Dr Khangura said growers would be wise to protect their crops from blackleg up until the six leaf stage, to optimise crop yields.

“After the six leaf stage the risk of infection is much lower but yield losses may still occur with susceptible varieties,” she said.