Cross-resistance to herbicides on the rise

WEED surveys and herbicide testing results across Australia are consistently confirming that herbicide resistance in economically important crop weeds is increasing and spreading. 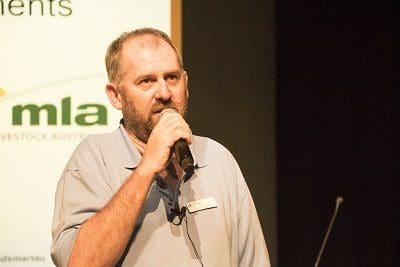 With some variation between states and regions the trends are remarkably similar.

“We gathered samples from the northern NSW and plains regions in 2016, which means we now have survey results from across the major grain growing regions of NSW,” he said.

The weeds that are collected in the surveys are tested for their susceptibility to the major herbicide groups used for their control. 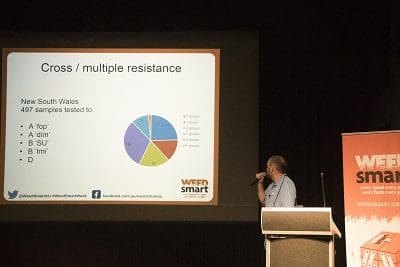 Speaking at the recent WeedSmart Week forum, John Broster presented results from the latest weed survey conducted in NSW where 43 per cent of surveyed annual ryegrass plants were resistant to three or more of the five important herbicide categories used to control this weed.

“There was less extensive resistance to the Group A ‘dims’ and Group D herbicides at 10 and 11 per cent of samples respectively.

“When we looked at cross-resistance in the ryegrass samples collected in NSW we found that while 24 per cent of samples were susceptible to all five of the major herbicide groups used for ryegrass control, a huge 43 per cent were resistant to three or more of these five herbicide categories.”

The surveys illustrate the level of cross-resistance that exists in cropping paddocks across NSW, and in other states around Australia.

At the recent WeedSmart Forum in Wagga Wagga where Dr Broster presented the latest survey results, 170 growers, agronomists and researchers compared notes and experiences about a whole raft of weed management tools, some largely untested but showing promise in the field.

Harvest weed seed control options were of great interest, as were the demonstrated benefits of double-break cropping, utilising livestock in mixed farming enterprises and ways to extend the effective use of herbicides.

The ‘Big 6’ WeedSmart tactics known to drive down weed numbers and drastically reduce the impact of herbicide resistance on Australian farms are:

Herbicide resistance can’t be beaten with herbicides alone — that’s the take-home message from the surveys.

However, even in paddocks where herbicide resistant weeds are almost as common as susceptible ones, this doesn’t mean ‘game over’, as many Western Australian farmers have shown.

It does mean that farming systems need more diversity and weed management programs need to include a range of tactics aimed at reducing weed numbers at every opportunity during the year.