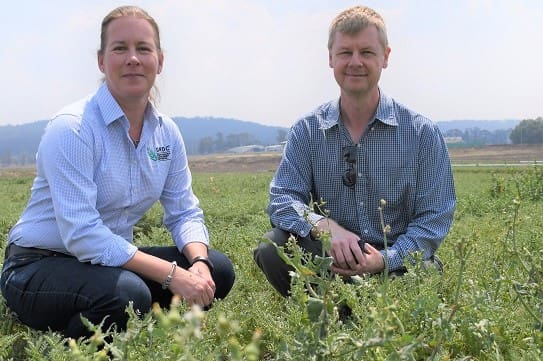 IT IS one of the only patches of green on the Darling Downs this season and researchers admit they have gone to extra effort to keep trial sites alive, so they can continue to deliver critical information back to grain growers.

The crop competition trial site at the Hermitage Research Station, just east of Warwick, is part of a research investment by the Grains Research and Development Corporation (GRDC) and the Department of Agriculture and Fisheries (DAF), led by the University of Sydney.

While defeating weeds through crop competition isn’t new, trials at the Hermitage over the past three years have shown that crop density and narrow row spacing could suppress the problem weeds, common sowthistle and fleabane, in the northern cropping region.

“Weed management has historically been heavily reliant on herbicides, but increasing issues with resistance combined with public concerns about the wider impact of herbicides is driving investigation of other weed control options,” Dr Widderick said.

“Crop competition is one of these options. As part of research being conducted at three sites – the Hermitage, Narrabri and Wagga Wagga – we are investigating the influence of crop species and cultivar, row spacing and plant population on the impact of in-crop weeds.

“Narrow row spacing has so far shown the clearest benefit in limiting weeds.”

Growers, agronomists and industry stakeholders turned up to see firsthand the trial plots at the Hermitage Research Station where faba beans and chickpeas’ competitiveness against the problematic winter crop weed common sowthistle (Sonchus oleraceus) was being assessed.

“Results from the first years of trial work have shown that growing a competitive crop can significantly reduce weed numbers, biomass and seed production in crop while providing increases in grain yield,” Dr Widderick said.

Dr Widderick said to date the results had been encouraging but data from this year’s harvest would provide greater clarity.

“This trial work is in its third year so we were determined to do what we could to ensure results from this season were available,” he said.

In a year, where no rainfall fell in-season and water sources at the Hermitage Research Station were limited and then non-existent, keeping the trial site alive required considerable effort.

“We ended up having to buy and then truck in 15 loads of water – that was 26,000 litres per load – to simulate rainfall on the site and ensure that the data from this year was usable,” Dr Widderick said.

A total of 120 millimetres of water per hectare was applied to the trial site from establishment through to final watering. It was a serious topic, but a chance to compare notes made the field day a social affair for agronomists Paul McIntosh, Toowoomba, John Kerlin, Pilton, and Hugh Reardon-Smith, Pittsworth. University of Queensland agronomy students Sophie Burdett, Goondiwindi, Marcelle Griessel, Brisbane, and Bailey Fraser, Childers, made the trip from their Gatton campus to the trial site at the Hermitage.