Does soil delving have a place in the east? The practice of mixing clay subsoil with sandy topsoil has been very beneficial in many parts of WA, but is not so straightforward for the soil types of eastern Australia.

DELVING or mixing a clay-based subsoil into a sandy topsoil is a practice that has benefited many grain growers in Western Australia, but does the same approach yield results for lighter soils in southern New South Wales?

While there has been limited, validated research into the value of the practice in the region, Riverine Plains Inc research officer and independent soil scientist Cassandra Schefe, is advising growers to exercise ‘extreme caution’ and do their groundwork before undertaking any delving treatments. 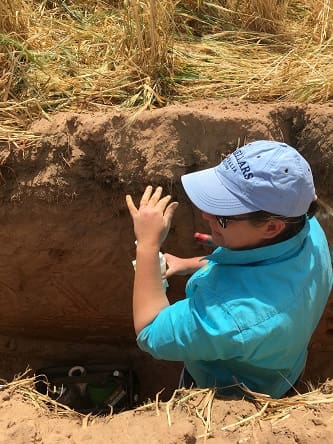 “There has been very little trial work into delving and clay spreading in southern NSW, primarily because this area has very localised sandy rises with a claypan underneath, rather than large problem areas,” Dr Schefe said.

“But in the past two years, a few growers across the region have undertaken delving treatments with positive results and this has generated significant local interest.

“Now we have growers looking at their land thinking ‘if delving is going to benefit this small area of sandy soil, maybe it will be good for the whole paddock’.

“But the very real concern is delving areas without understanding the subsoil constraints and mixing problem clay with their topsoil, which could create serious and irreversible problems in the paddock.”

Dr Schefe said in WA where the practice of delving and clay spreading was widespread, growers were working with large areas of deep sands, but the soil types were significantly different in southern NSW.

“Delving and clay spreading in the wrong situation scares me because it is so irreversible and it could well become a dirt nightmare for the grower involved,” she said.

“Before growers or farm advisers consider this type of treatment, they absolutely need to know what is underneath the surface.”

Dr Schefe said there were incredibly varied soil types across the Riverina.

“Even within paddocks, there are major variations – for example in one 50-hectare paddock there might be three or four different soil types,” she said.

“Before you start digging up areas of your paddock, dig a hole and find out what is down there and get it tested.

“If you don’t, you could end up mixing sodic, saline or acidic clay with your topsoil or sand; bringing sodic clay to the surface can reduce water infiltration and inhibit germination while delving too deep can cause erosion.”

Adopting a strategic approach to this form of soil treatment is an approach supported by Riverina growers David and Sharon Fisher.

The Fishers began delving and clay spreading on their lighter, sandy soils two years ago, motivated by a neighbour’s success and awareness of successful clay delving in other regions.

“We started delving purely as a trial. We were unsure it would deliver results given our soil type and the fact we were only doing strategic treatments on sandy areas,” Mr Fisher said.

“But the transformation was incredible. Even with the limited rainfall last year, in the areas we had treated our wheat yields were 1.6 tonnes per hectare compared with untreated control areas which went 300-600 kilograms/ha.”

The improvements were so dramatic the Fishers invested in their own delving equipment with a plan to continue treatments on selected areas of their 1800ha operation at Rennie.

“We have significant variation across individual paddocks so ultimately we are looking at potentially doing 25 to 50 per cent of each paddock, depending on the results of deep soil tests combined with satellite maps and harvest yield data,” Mr Fisher said.

“Before we began, we did soil tests at a depth of 1.2 metres and used the satellite and yield maps to determine the exact areas we needed to treat.

“Last year some of these treated areas yielded more than our better country, possibly because the crop could utilise retained nutrients and stored moisture at depth as a result of the work.

“So, our decision to invest in delving equipment came with risks, but we wanted to be able to continue to improve our paddocks and we felt our decision was supported by our significant yield increases.”

Mr Fisher said the cost of delving at a contract rate worked out at approximately $400/ha, but in their case the treatment ‘will pay for itself’ as a result of subsequent yield improvements.

“My advice to other growers contemplating delving would be to do the soil tests and determine where exactly the work is going to be done, so the treatments are targeted,” he said.

“It is too expensive to go ahead and do the work without considering where and why you are doing it.”

His advice matches the recommendations of Dr Schefe, who said it was important growers considered the following actions before undertaking delving and clay spreading work:

For more information on clay spreading and delving in light, sandy soils go to https://bit.ly/2QxGDAe.