THERE is a very low probability of widespread locust infestations developing in spring or December in eastern Australia, according to the latest report from the Australian Plague Locust Commission (APLC). 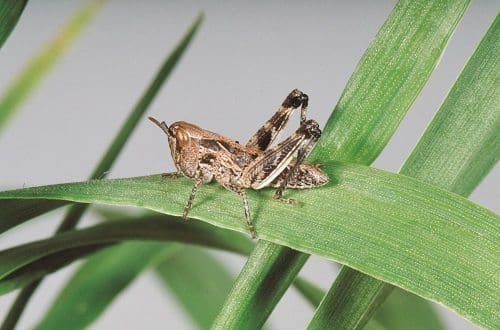 Vegetation in most areas that received rainfall during summer dried out rapidly and habitats became increasingly dry in autumn.

The low food availability, combined with prolonged high temperatures, are likely to have contributed to increased mortality of nymphs and adults.

Floodwaters moved down the channels of the Thompson, Diamantina and Georgina rivers and the Eyre Creek during March and April, extending the vegetation response southwards in late autumn and winter.

Surveys in western Queensland in April and May 2019 identified a moderate increase in adult numbers over preceding months and low density nymphs were recorded in some locations of the south west and north west regions.

Subsequent surveys of these regions during September recorded a similar population level. Low density adults were widespread, but most were recently fledged from a winter nymph generation.

Localised medium density adults and residual low density late-instar nymphs were identified in the Windorah area. Vegetation remained green in flood-out areas during winter, but was becoming dry in most areas by September.

Low density adults were identified in the Tibooburra and Bourke districts of the Far West region in May, representing a small increase in numbers over preceding months.

Late autumn rainfall in parts of the Far West and Far South West and Riverina regions produced green vegetation during winter, which became dry during September.

There have been no reports from the Central Tablelands or Hunter regions, despite locust populations developing in those areas in summer.

Survey of the North East region in late September did not detect any locusts.

Habitat conditions are green in southern regions but remain very dry in the northern half of the state.

Habitat conditions have improved after winter rainfall, but the locust population is likely to remain at low densities during spring.

Some nymphs could develop during spring from eggs laid by the local population in the Omeo Valley area of East Gippsland. The spring outlook is for continuing low population densities in most regions of inland eastern Australia.

Drought conditions across much of NSW, SA and Queensland have resulted in very low locust population levels and unfavourable habitat conditions.

It is likely that more than one generation of successful breeding would be necessary to produce large population increases.

The Bureau of Meteorology seasonal outlook indicates that below average rainfall and above average temperatures are likely to continue over coming months.

Therefore, there is a low likelihood of high density populations developing in any inland region during spring.

The population level of spur-throated locust remained very low throughout 2018-19.

Only low density adults were recorded by surveys in Queensland and no nymphs were detected.

Very few adults were recorded in NSW or SA.

This was one of the smallest annual populations recorded in APLC survey regions and is likely be the result of a low summer breeding population base and the late and sporadic wet season rainfall over the last two years.

There is a low risk of a widespread infestation developing during spring 2019 or summer 2020.

Report locust activity to the APLC at [email protected] or website http://www.agriculture.gov.au/aplc