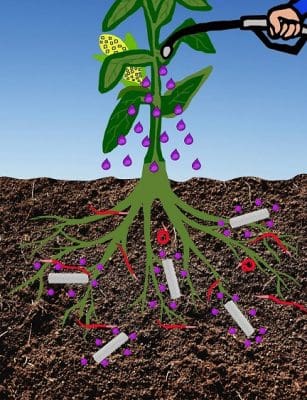 This image shows roots of a corn plant infected by endoparasitic nematodes (in red). The plant is being treated with a pesticide (purple sphere) encapsulated into tobacco mild green mosaic virus (grey rods). The virus enhances the diffusion of the pesticide to the root level of the plant, where the nematode resides, thus increasing treatment efficacy. (Photo: Paul Chariou)

The tiny roundworms, or nematodes, cause $157 billion in crop failures worldwide each year, other researchers estimate, largely because they’re beyond the reach of pesticides. The chemicals disperse poorly into soil, while the parasites feed at plant roots well below the surface.

As a result, farmers apply large amounts of pesticides, which can increase the chemical concentrations in food or run off and damage other parts of the environment, all of which have costs.

But biomedical engineering researchers at Case Western Reserve may have found an effective solution.

“We use biological nanoparticles–a plant virus–to deliver a pesticide,” a PhD student in biomedical engineering at Case Western Reserve and author of a study on the process published in the journal ACS Nano, Paul Chariou, said.

“Use of the nanoparticle increases soil diffusion while decreasing the risk of leaching and runoff, reducing the amount of chemical in food crops and reducing the cost to treat crops.”

Parasitic nematodes feed on a wide range of crops, including corn, wheat, coffee, soybeans, potatoes and a host of fruit trees.

Damage they cause at the roots impairs the plants’ ability to absorb water and nutrients, which can kill young plants and reduce yields in mature plants.

The virus is used in Florida as a pesticide to control an invasive weed, but is benign to nematodes.

TMGMV can infect tomatoes, eggplant and other solenaceous plants, but is not a threat to nearly 3000 other plant species that suffer nematode infections.

As a proof of concept for this study, the researchers tested the plant virus-derived nanoparticles with a nematicide called crystal violet, which has been used to kill nematodes on skin but not in agriculture.

In lab experiments with conditions mimicking crop soils with a pH of 5, the nematicide remained attached as the virus particles were applied to and diffused through the soil.

“At the root level, the nematicide diffuses out of the virus over time,” Mr Chariou said.

Warmer and more acidic soils caused the chemical to be released faster.

In testing with the nematode Caenorhabdiis elegans, in a liquid culture, the scientists confirmed that nematodes were paralysed and killed by treatment with the drug-infused virus-nanoparticle – this is because the drug diffuses out of its carrier over time allowing it to interact with the nematodes.

As a secondary killing mechanism, the researcher also noted that the roundworms were eating the nanoparticles.

The crystal violet was released in the animals’ stomachs, paralysing and killing them.

Most importantly, nematicide-carrying virus particles dispersed better when applied to the soil surface and made more molecules available to kill nematodes at the root level.

Mr Chariou and Professor Steinmetz are now testing the delivery system using chemical pesticides approved for crops and developing a computer model to better understand and, ultimately, optimize the nanoparticle’s ability to diffuse through soil.