A RECORD dry July has taken its toll on NSW winter crops, particularly in the western areas of the central and northern farming regions where crops are struggling under the conditions. 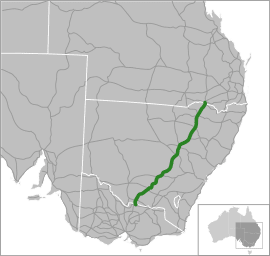 Crops to the west of the Newell Highway are doing it tough, while those to the east are fairing better. (Map: Wikipedia)

For much of the growing season the Newell Highway has been the defining line with crops to the west doing it tough and those to the east fairing much better.

But as the season has progressed, the line has crept eastwards as the ongoing dry encroaches into the more favoured areas, particularly in the north of the state.

Penagcon consultant at Bellata in the north between Moree and Narrabri, Drew Penberthy, said the situation in much of the region was dire, particularly for crops in the western areas.

“The crops out west are basically ‘dusted’. I don’t see how they are going to get anything out there. There is just no moisture under the crops. They have hit the wall,” he said. This wheat crop at Garah in north west NSW is feeling the effects of a dry season. (Photo: NSW DPI)

“It was a drier than average planting with the moisture profile lower than we would have liked leading into planting. That has been followed by a really dry growing period to date, and the crops are showing it. We are going to see the result in the yields not being there,” she said.

“If we got rain the next week to three weeks we could probably see a change, but for a lot of crops it is to the stage where we need rain in the next seven days.”

Around Central Western NSW, Grain Orana Alliance CEO and grower, Maurie Street, said crops in the northern parts of the region were feeling the effects of the dry while those to the south were travelling much better.

“If you go south of Dubbo to Parkes and Forbes, there is good potential in the crops around there. But around Dubbo the potential drops away quickly. We are looking skywards for a shower of rain to maintain a reasonable potential,” he said.

“We picked up an inch (25mm) of rain two weeks ago over a week, but the unfortunate synopsis of that was the inch of rain for the week was the biggest rain event we have had since March. It kept things poking along, but we are lacking a real injection of rain.”

It’s a brighter story in the south of the state where Delta Ag consultant and director, Tim Condon, Harden, said crops on the South West Slopes were “back in the game”.

“We had quite a good start with good rains in late April and again in late May, so we got a lot of the crop in and out of the ground and going along quite well,” he said.

“Then from May 20 up to the last day in July it didn’t rain again. Crops suffered a bit because of that. Some crops bolted prematurely.

“The canola is starting to flower and growers are moving into fungicide activity with sclerotinia management. The wheat is on track to be hitting Z32 (second node stage) and is starting to joint up. All pretty normal.”

“Most people have enough nitrogen to target 4 tonnes/hectare of wheat and 2t/ha of canola. They are comfortable in that position,” he said.

“Some have gone harder, particularly on canola, because you can’t hay that crop off. The theory is if the nitrogen is not used this year it will be there for next year.

“If we get average to slightly below average rainfall from here on in we will have a good season.”

In the south west, GRDC northern panel chair and consultant at West Wyalong, John Minogue, said recent rain had helped growers in the area “snatch victory from the jaws of defeat”. 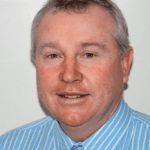 “We were two months without rain in June/July. Crops that were planted and emerged were really suffering moisture stress. Then two weeks ago we had about 50 millimetres of rain. There has been more growth in the past two weeks than there was in the past two months,” he said.

“There are some crops that have had yield potential reduced, but the majority have recovered quite well.

“There are crops to the west that didn’t emerge after planting and are only just emerging now. It is a patchy situation. But in general, we are on par for a below average year without any more rain.”

NSW Department of Primary Industries (DPI) seasonal conditions coordinator Ian McGowen said July was another record-breaking month with some areas of eastern and central NSW experiencing the driest July for 20 years, or the driest on record.

“During July rainfall was below average across 71 per cent of the state,” Mr McGowen said.

“Most of NSW received between 1 and 25 millimetres for the month.

“The best falls occurred in the south, particularly in the alpine areas, and extended into the eastern and central Riverina.

The Bureau of Meteorology’s rainfall outlook for August indicates drier than normal conditions are likely across much of western, central, southern NSW and areas of the south east.

Daytime and overnight temperatures are likely to be warmer than normal across NSW.

These outlooks have been influenced by warmer than normal sea surface temperatures in the Indian Ocean, the prospect of high atmospheric pressure and the possibility of a positive Southern Annular Mode.

These contribute to the likelihood of decreased westerly winds and a reduced likelihood of rain-bearing systems across inland NSW.