AUSTRALIA’s government commodity forecaster, ABARES, has foreshadowed a reduction in the size of the nation’s 2017/18 winter crop now being harvested when its next crop report comes out 5 December.

ABARES said the serious to severe rainfall deficiencies between June and September across much of NSW, parts of central and southern Queensland and central southern South Australia were all feeding into the likelihood of a production cut.

“Unfavourable seasonal conditions in key cropping regions since the release of the September 2017 edition of the Australian Crop Report mean that ABARES is likely to downgrade its forecast of 2017–18 winter crop production in the December edition,” ABARES said. 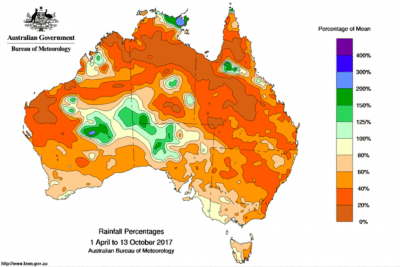 Figure 1: Percentage of mean rainfall, 1 April 2017 to 12 October 2017, showing most of NSW and Qld cropping area has received between 20 per cent and 60pc of growing season rainfall, while the southern WA cropping zone has generally fared 60pc or better. (Source: BOM)

ABARES’ current estimate for winter-crop production is 36.3 million tonnes, 2 per cent above the 10-year average to 2015/16.

“Since the September crop report was published, seasonal conditions were generally unfavourable for crop development in the eastern states in September with well below-average rainfall, above-average day time temperatures and significant frost events in many regions.”

The turnaround in seasonal conditions from the September forecast is likely to have its greatest effect on the crop size in NSW, where largely inconsequential rains during winter and early spring did little to bolster yield outlooks on all but the later crops.

Crops in the eastern and southern parts of NSW were described as being generally in good condition at the end of winter, but crops in other parts of the state were suffering from a hot and dry September.

ABARES said crops conditions in NSW’s central west deteriorated significantly, and many crops that were moisture stressed at the end of winter and in need of favourable seasonal conditions in early spring have failed and will not be harvested.

Crops on South Australia’s Eyre and Yorke peninsulas were described as being six to eight weeks behind normal development at the end of winter, and crop development has suffered because of adverse seasonal conditions in September.

However, the seasonal outlook for October released by the Bureau of Meteorology on 28 September has been seen as favourable, predicting above-average rainfall and lower-than-average daytime temperatures.

Eyre and Yorke peninsula crops are believed to be in good enough condition to benefit from the favourable seasonal conditions, and if these eventuate, ABARES does not envisage a significant change between the September and December forecasts for South Australian winter-crop production.

ABARES said the assessment of crop conditions which will bear on December crop report figures were preliminary, and rainfall which has fallen this week in parts of the grainbelt may improve yield outlooks for some crops.

Harvest in Central Queensland, Australia’s northernmost cropping area, is now close to complete, and is under way in earnest in southern Queensland and north-west NSW.

The South and Western Australian harvests have started in the past week, and the headers are yet to roll in Victoria.