WITH winter crop sowing in full swing across Australia, Grain Central this week takes a state-by-state look at how the planting program is progressing. Today the focus is on Western Australia.

IT has been a frustrating start to the winter crop sowing season for Western Australian growers with most of the state holding good sub-soil moisture levels, but not receiving enough rain to wet sow or link up with the big percentage of dry-sown crops that have gone in. 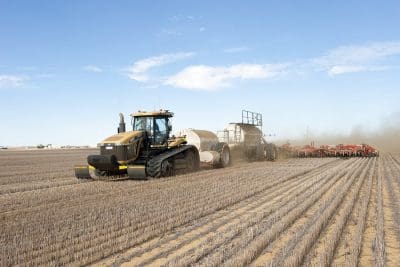 Rain over the past 24 hours around the western rim of the wheatbelt and in the Great Southern has brought only minor falls, including about 10 millimetres around Katanning and Gnowangerup. But it hasn’t gone very far inland.

Further showers are forecast to come through today and tomorrow, but farmers are looking more optimistically ahead to an emerging chance of rain on Friday.

The latest GIWA crop report estimates 4.897 million hectares of wheat will be planted in WA this season; 1.28 million ha of barley; 1.2 million ha of canola; and 352,000ha of lupins.

GIWA Oilseeds Council chair, Michael Lamond, said most of the intended canola plantings had been completed with a slight reduction overall in plantings from what was projected in April due to the lack of rain, but a little more could go in if rain eventuates later in the week.

Mr Lamond said while barley plantings would be down on last year, estimates had risen slightly on the back of the dry times.

“A month ago there was definitely going to be a decrease in barley, but in the last couple of weeks because of the continuing dry causing people to move away from canola, lupins and oats, it looks like the barley area might creep up a little bit,” he said.

Mr Lamond said there was still a substantial amount of wheat to go in the ground with expectations the area would not vary much to earlier estimates.

“There will be little change, or only a slight reduction in wheat area, because it probably won’t go in on the fallow country in the low rainfall areas where it had been anticipated it would. That will change over the next two weeks. If we don’t get rain in the eastern areas it could drop quite a bit,” he said.

The GIWA crop report says canola crops that are up are generally patchy with split germinations within individual paddocks.

Lupin plantings look to be slightly lower than April 2017 estimates.

The GIWA report says the intended barley area looks to have increased from last month, being substituted for the reduction in canola plantings.

Milling oats for grain are going to be down on 2016 at this stage, however, this could change in the next month as the total cereal plantings in the medium to high rainfall areas still have a long way to go. Hence it is too early to predict changes in wheat also. 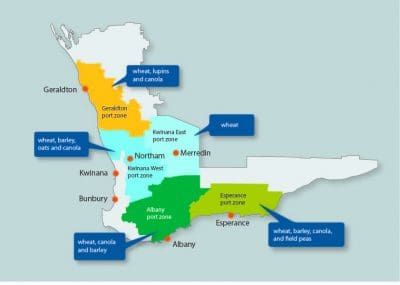 In the Geraldton port zone, about 60 to 70 per cent of the total crop program has been completed. Overall, there will probably be a slight decrease in the canola and lupin areas from predictions in April 2017 and a slight increase in the barley area in the zone.

Sub-soil moisture levels in the Geraldton zone are good in areas where the crop is up and not under moisture stress.

The crop has gone in well to date with the dry sowing conditions on the surface allowing airseeders to get through the heavy stubbles from 2016 more easily than if it was wet.

In the Kwinana port zone, the canola and lupins that have been planted in the Midlands region have patchy germination.

In the Kwinana West region, 10 to 15pc of the total crop area for the central wheatbelt was sown into moisture from summer rains, with about 70pc of that looking good at present.

About 10pc of the canola crop area is looking good, 40pc hit and miss with 50pc not out of the ground as yet.

In the Albany port zone, in the western areas 60 to 70pc of canola has been sown to date and of that, about 60pc has come up, particularly in the earlier sown paddocks around Easter time.

Around the lakes region, 30 to 40pc of the total crop has been planted, most of the canola and lupins are in with small areas of cereal at this stage.

In the Esperance port zone, it is a mixed bag with some growers finished planting and some with still a fair way to go depending on soil type mixes and how much of the summer rain was received. About 60 to 70pc of the crop has been sown with most going into moisture.