DISAPPOINTMENT in modest outcomes for Australia’s 2018/19 summer crop production is no better displayed than by images the United States Department of Agriculture (USDA) published this week as lack of rain continued to diminish plant-available moisture in the eastern states.

Heat and dryness were the causes of shrinking sorghum and cotton crops according to Production, Supply and Distribution (PSD) data from the Foreign Agricultural Service (FAS) world agricultural production estimates March 2019.

The current situation is shown on the right hand side of figure 1 which uses satellite data compiled by USDA to tell the story that farmers and related primary industries are already well aware of through their on-the-ground experiences; low moisture and disappointing summer crops across both rain-fed and irrigated production systems in New South Wales are delivering below-average yields. It estimated the harvested area at 540,000ha and total harvest quantity 1.3 million tonnes.

Figure 2 shows only two previous years in the past 10 where sorghum production was lower than the 2018/19 forecast, indicated by the green cross-hatched column on the right.  Yield was salvaged somewhat by localised summer storm rain the week before Christmas on the inner Darling Downs district in southern Queensland. 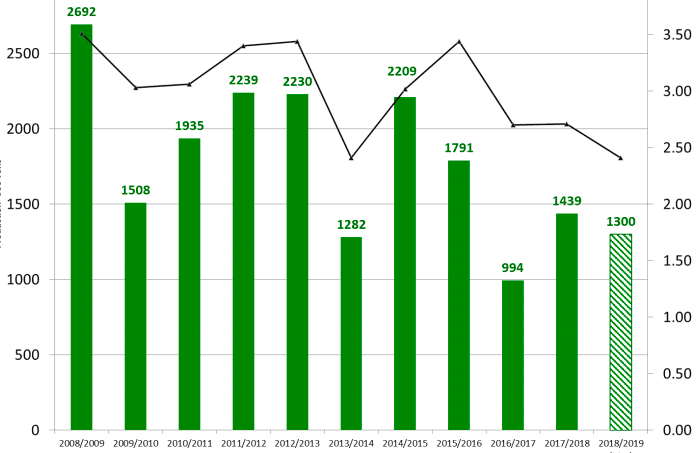 January and February’s high temperatures further stressed the crop, which was already struggling from a lack of soil moisture.

Soil moisture levels are well below average in all sorghum regions.

Queensland usually produces about one-third of Australia’s sorghum, and New South Wales accounts for the remainder. Sorghum is sown from September through February. Late-season planting of sorghum is expected to be minimal because of unfavourable seasonal conditions during the past several weeks.