Early signs that weeds can develop ‘resistance’ to HWSC I WAS on a trip a couple of years ago with Ray Harrington talking all things harvest weed seed control (HWSC) to groups of farmers held in very cold sheds around the Western Australian wheatbelt, which happens to be one of the most enjoyable aspects of my job.

Every single time I have ever done one of these trips and given presentations about HWSC, the same question has come from the audience, without fail:

“Will the weeds adapt to HWSC and start shedding their seed or setting seed below the harvest height?”

I normally would then launch into an answer about how we’ve been doing HWSC for about 30 years in WA and so far we’ve measured very little adaptation by the weeds to avoid HWSC, quoting various bits of research on the topic.

But Ray being Ray took a very different approach.

“Of course the bloody weeds will adapt,” he said. “And then we will adapt and overcome.”

Some recent Australian Herbicide Resistance Initiative (AHRI) research by Chinese research student Ci Sun, and Dr Mike Ashworth and others, has investigated some early flowering wild radish and found that it does indeed set its seed below the harvest height.

But we can ‘adapt and overcome’ to this new genetic trait by increasing crop competition.

Wild radish plants grown in competition with wheat grew taller seeking light and its flowering/pod height increased. Fortunately, any adaptation that helps weeds to avoid HWSC will make them more susceptible to crop competition, which is why these two practices go hand in hand.

Weeds that can adapt their growth habit to avoid HWSC are certainly a threat and we must stay one step ahead by adapting our farming techniques.

The first part of this research involved “breeding” an early flowering wild radish cohort. The researchers started with a population of wild radish that was sampled from the Yuna rubbish tip in 1999 called G0 in this study.

They grew this wild radish then selected the earliest flowering individuals and isolated them as such that they would cross pollinate only with one another. This is called recurrent selection.

They did this for five generations to breed the EF5 population (earliest flowering generation 5) that flowered 17 days earlier than the original G0 population. The chart below shows the difference between the G0 and EF5 populations Wild radish was grown in pots with various wheat densities as per the diagram below where the single wild radish plant is represented by a closed circle and the wheat plants are represented by open circles.

G0 and EF5 respond the same to competition from wheat

The charts below show that both the early flowering EF5 population and the normal G0 population have similar growth and a similar response to competition with wheat. Note the change in scale between the two charts showing that wheat competition roughly halved wild radish growth.

No surprises here, but the important detail to note on this chart is that both the early flowering and the normal population of wild radish respond the same to competition with wheat. 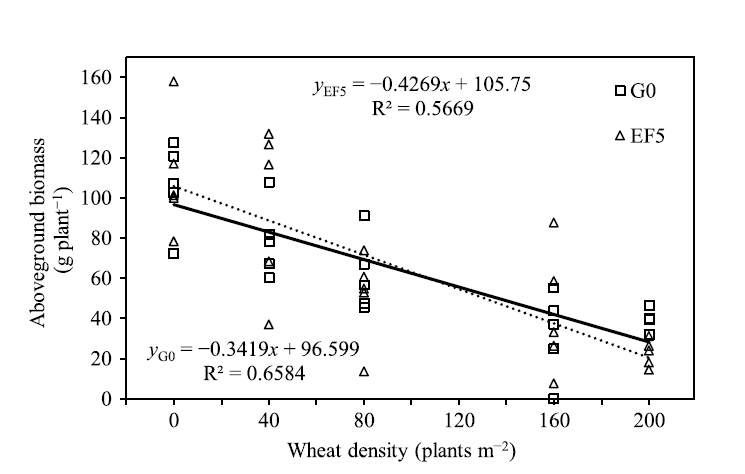 Increasing wheat competition increased the flowering time of the normal G0 population but it had no effect on the early flowering EF5 population. 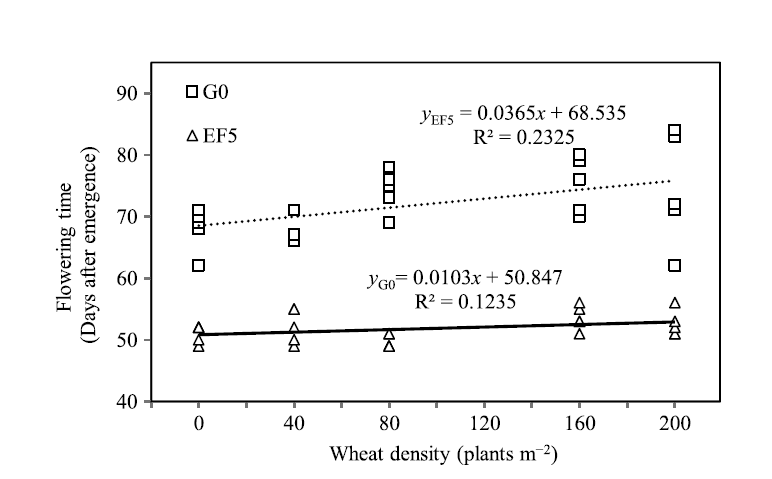 Now for the good news! Increasing competition with wheat increased the height of the lowest flower of both wild radish populations.

This increased the flower/pod height of the early flowering radish to a height at which HWSC will capture that seed, however, the flower height is still significantly lower than the normal G0 population.

This increase in flower height is due to plants growing taller to search for light in competition with wheat. 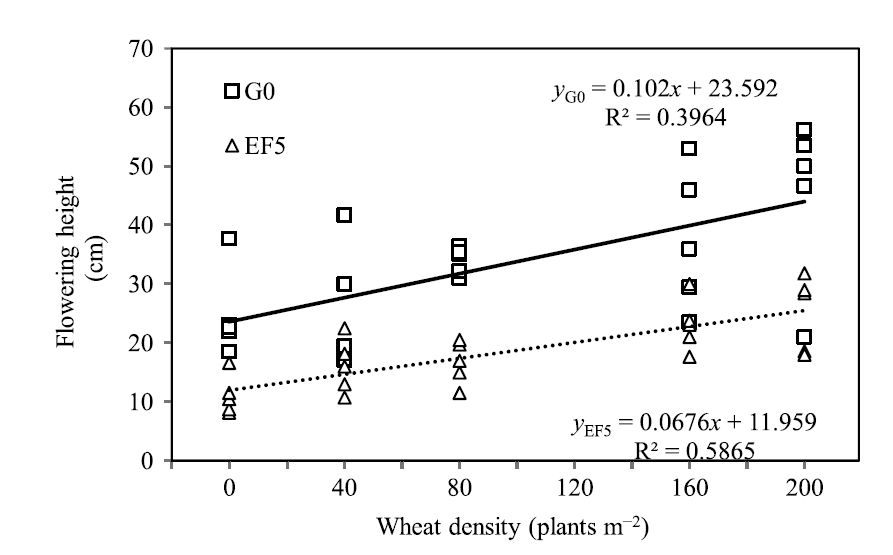 The genes for traits such as early flowering are pretty common in weed populations and therefore easy to select for.

Traits such as early flowering, low seed height and seed shedding are definitely a threat to HWSC and, as Ray would say, “we must adapt and overcome”.

The trick is not to rely on any one practice such as HWSC and perhaps even consider adding tools such as swathing (windrowing) of crops to bring harvest forward. The weeds will adapt. Diversity is the answer.