GRAIN growers searching for a profitable break crop will have an opportunity to integrate early sown field peas into their program, with research underway in Western Australia to develop an agronomic management package. 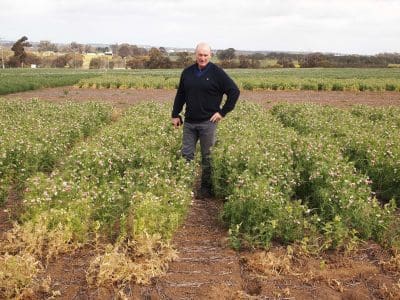 Field peas are typically sown late in the growing season, mainly due to the risk of fungal diseases. However, early sown field peas have shown potential for increased yields.

An estimated 25,000 hectares of field peas were sown in Western Australia in 2016, mainly on the South Coast.

The Department of Agriculture and Food (DAFWA) has commenced a new research project to overcome constraints to sowing early and develop a production package in an attempt to lift yields by 15 per cent.

The research is one of a suite of 11 Grains Flagship projects, which are part of the department’s $20 million Boosting Grains Research and Development initiative, made possible by Royalties for Regions.

Project leader, research officer Ron Yates, said one of the keys to successful early sown field peas would be to identify a robust rhizobium, symbiotic bacteria found in nodules on the plant roots that aid nitrogen fixation.

Four elite strains of rhizobium are being used in the project, sourced from Sardinia, which have shown potential to be an effective inoculant in harsher soils.

“Effective weed control is essential if field peas are to be sown earlier in the season,” he said.

“A successful field pea crop is particularly reliant on pre-emergent herbicides, so it is important that the project evaluates suitable and effective sprays that don’t lead to yield loss.”

Research trials planted at Grass Patch and Wittenoom Hills, Katanning and Nyabing in 2016 were sown with Wharton or Gunyah field peas and treated with various herbicides, fungicides and rhizobium inoculants.

“Preliminary findings suggest that Imidazolinone herbicides had less of an impact on the N fixation and yield of the field peas than Trifluralin and Terbuthylazine,” Dr Yates said.

This year Dr Yates plans to sow the plots again and subject them to three management strategies: low, standard and elite.

The low management package will have limited inputs, including basic herbicides, while rhizobia inoculation and foliar fungicides will be withheld.

The standard package will be inoculated with the current commercial rhizobium, receive fungicide plus a basic herbicide treatment.

The seed from the elite package will be inoculated by granules with one of the high performing Sardinian strains of rhizobia, receive fungicide seed dressing plus fungicide in-furrow fertiliser application, along with a targeted herbicide regime.

“These scenarios will enable us to develop a better understanding of the seed, herbicide and fungicide treatments required to optimise the performance of early sown field peas,” Dr Yates said.

“The package will provide growers with more confidence to integrate field peas into their crop sequences, which will also generate long term nitrogen fixing benefits for subsequent cereal crops.”

However, the project scientists are mindful that sowing early may elevate the frost risk in some regions.

The field trials will be reinforced by an economic cost-benefit analysis of the treatments, from which recommendations for early sown peas can be developed.