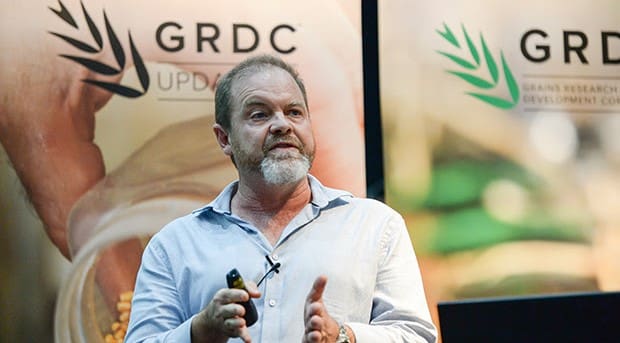 “Most of NSW had a really good year last year. So, a lot more leaf diseases appeared. Coming off a run of drought years we forgot about some of the basis management strategies for leaf diseases. So, it is really about getting back to basics,” he said.

Dr Simpfendorfer said growers could minimise the yield impact of cereal diseases by managing three key factors – the host, the pathogen and the environment.

“Disease levels in 2021 will still be based around the disease triangle, which requires a combination of pathogen inoculum, susceptible host and environmental conditions conducive to disease development,” he said.

“Cereal disease risk is likely to be higher due to pathogen build-up in 2020 and the likely increased area of cereal-on-cereal in 2021.

“All three components of the disease triangle should be considered when developing management strategies, which will help to minimise losses and determine if fungicide application is warranted.”

Dr Simpfendorfer said the disease of main concern this year was crown rot.

“We didn’t get a lot of expression of white heads last year that show stress during grain fill. There was reduced expression,” he said.

“But we know there is a lot of crown rot inoculum sitting out there in paddocks. Inoculum is a function of the percentage of plants that get infected with crown rot fungus, and the stubble load that is left in a paddock. When we have big (crop production) years there are big chunks of inoculum that go back in.

“We know there was a big cereal crop area last year to restore ground cover after the drought. We know this year there will be a lot more cereal-on-cereal crops grown. We know it is not the ideal thing to do, but there isn’t the level of break crop to put across that area.”

“In situations where they have to go cereal-on-cereal this year, they need to look at stubble management options, sowing times and varieties to reduce the risk of getting severe yield loss,” he said. Crown rot has potential to be a significant threat to cereal yields this year.

Dr Simpfendorfer said it was critical that growers running a cereal-on-cereal rotation used the latest varietal resistance ratings and prioritised high resistance ratings for the pathogen most prevalent in the region and/or likely to cause the greatest yield loss if they had a situation where multiple pathogens were present.

He said it was also important to recognise that barley, bread wheat, durum, oats and triticale are not break crops for each other due to the fact they all host Fusarium crown rot, take-all and Rhizoctonia.

At the same time, with high stubble loads in paddocks, stubble management will play a key role in containing soil and stubble-borne diseases such as Fusarium crown rot.

“However, cultivating or mulching infected cereal stubble prior to sowing can spread Fusarium inoculum more evenly across a paddock and potentially into the surface layers of the soil where plant infection primarily occurs.”

When it comes to environmental conditions, disease management options are more limited however growers should keep in mind that subtle microclimate differences within cereal canopies can have a large influence on the development of foliar diseases. Hence, canopy management can play a significant role in managing leaf diseases.

“Recent weather conditions, including in the fortnight prior, and predicted weather conditions over the ensuing two to four weeks should also be considered with in-crop leaf disease management decisions in susceptible varieties around key growth stages for fungicide application of GS30-32 (first node), GS39 (flag leaf emergence) and GS61 (flowering),” Dr Simpfendorfer said.

Conversely, yield loss from Fusarium crown rot infection, which may be expressed as whiteheads, is strongly related to moisture and temperature stress during grain filling.

Although growers cannot control rainfall during this period, Dr Simpfendorfer said there was the potential to limit the probability of stress.

“This can be done through earlier sowing (matched to varietal maturity and frost risk), maximising soil water storage during fallow periods (stubble cover plus weed control), addressing other biotic (such as nematodes, Rhizoctonia) or abiotic (including acidity, nutrition, residual herbicides) constraints to root development and canopy management,” he said.

Crown Analytical Services’ Rob Long, Pallamallawa, north west NSW, said 2020 had been a massive cereal year coming after the 2019 drought where growers had reacted by putting in big areas of cereals. Mr Long said that presented them with the challenge of what to do in terms of their winter crop decisions this year.

With a high risk of diseases lurking in cereal stubbles, he said growers would be well advised to test for the level of disease present in their paddocks in the lead up to winter sowing.

“It is a perfect time now to go out and test their paddocks. Of the tests we have got back to date, crown rot is certainly elevated, as is common root rot. There are also other factors like root lesion nematodes,” he said.

“A test like Predicta B gives you 14 different pathogen results back that you can make really good decisions on. Most people will be planting a cereal back into a cereal, but at least if you know what the disease levels are you can prioritise the paddocks where you are running either a high risk or a low risk.”

Speaking at the GRDC Research Update at Dalby on the Darling Downs, Queensland Department of Agriculture and Fisheries senior plant pathologist, Lisle Snyman, said unlike NSW, Queensland had not had significant rust issues over the past few years due to the dry conditions and low crop production.

However, Dr Snyman said there had been quite a few pathotype changes over the past few years, including two new exotic incursions that had had an impact on the resistance ratings of a number of varieties.

“The 239 pathotype identified in Victoria in 2017 popped up everywhere in 2020. It has changed the resistance ratings of a lot of varieties,” she said.

“The other one is 198 that was identified in Wagga Wagga in 2018. In the same season it was present in Victoria and Tasmania. It has spread quite quickly in 2019 across the eastern states and in 2020 it was the (prominent) pathotype.” Dr Snynan said the reappearance of smut in barley was a reminder for producers to maintain effective fungicide treatment of planting seed. “If seed is sourced from a crop known to have been infected with loose smut, it would be useful to treat seed at the higher recommended rate,” she said.

“The increased incidence may be due to a variety of reasons, including good infection conditions, application of lower rates of fungicide or ineffective application or varietal susceptibility.

The key to countering this was to limit fungicide application by spraying only when necessary, rotate fungicides with different modes of action and use recommended rates.

NSW DPI, with co-investment from GDRC, is offering a complimentary cereal stubble testing service prior to sowing in 2021 (January-April) aimed primarily at determining Fusarium crown rot risk levels in cereal-on-cereal situations. This can be arranged by contacting Dr Simpfendorfer on [email protected]

For more information, download a copy of Dr Simpfendorfer’s GRDC Update paper ‘NSW cereal diagnostics and enquiries…and the winner is?’

A copy of the GRDC fact sheet on crown rot is available here.