AS glyphosate comes under intense scrutiny in the European Union (EU), researchers at the University of New England (UNE) in Armidale, NSW, are pondering the consequences of a ban on the herbicide in Australia.

The EU Commission last week voted to renew a five-year licence for the use of glyphosate in member countries, but the renewal was bitterly disputed.

Opponents of the herbicide, which is the central tool of many farming practices, have vowed to search for alternatives to ensure the herbicide is banned in the EU from 2021.

UNE pollution specialist Associate Professor Susan Wilson and Weed Professor Brian Sindel said that as a result of the EU’s scrutiny, Australian authorities might be forced to revisit their approval of the chemical.

“There will undoubtedly be more questions raised about glyphosate use in Australia ” Dr Wilson said.

The broad-spectrum herbicide is a primary tool of agriculture in Australia and around the world, and millions of litres are used every year in home gardens and by municipal councils.​

In Europe, glyphosate’s popularity may yet be its downfall. The EU Commission deliberations follow concerns about the high level of glyphosate found in some European soils, human urine and foodstuffs, and possible links to cancer.

Last year the World Health Organisation’s (WHO) International Agency for Research on Cancer classified glyphosate as “probably carcinogenic to humans”.

But subsequent risk assessments by WHO pesticide specialists concluded that exposure to glyphosate in food was unlikely to cause cancer.

Glyphosate has been approved for use in Australia for more than 40 years and is the active ingredient in about 500 herbicide products.

“The way soils and plants take up glyphosate and how much it degrades or leaches in the environment depends on the soil type and climatic conditions,” she said.

“The situation in the Northern Hemisphere is different to Australia. We need to understand whether glyphosate poses the same concerns here and, with this information, decide whether a complete ban or restrictions on its use are warranted.”

Professor Sindel said Australia’s dependence on glyphosate for agriculture and food production would make any future ban highly contentious, especially given there was currently no effective broad-spectrum alternative.

“For many farmers, glyphosate is the go-to herbicide, and without it agricultural production would be severely impaired,” he said.

“Farmers would be forced to use other methods to control weeds, which would increase the cost of production considerably, and this would flow on to higher food costs for consumers. If glyphosate were banned, it would put a lot of farmers in a very difficult situation.”

To build a better picture of the effects of glyphosate, Professor Sindel and his colleagues have applied it to different soils and assessed its uptake through wheat plants.

(In use, the herbicide is applied to leaves, but the EU concerns include glyphosate’s persistence in the soil and its uptake through plant roots.)

Professor Sindel said the group at UNE had developed methods for measuring glyphosate.

“That puts it in a strong position to address some of the questions troubling the EU,” he said.

Weeds pose a major problem on offshore nature reserves, but could the most reliable means of controlling them cause more harm than the plants themselves?

That’s one of the questions UNE PhD student Kirsten Drew is trying to answer on some of Australia’s most pristine and precious island environments. 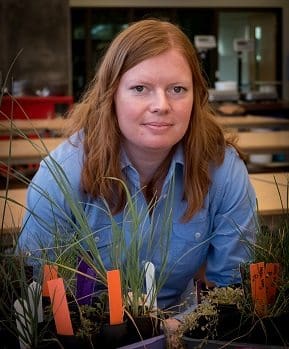 Ms Drew is about to begin sampling soils from islands off the NSW coast – South Solitary, Broughton and Big islands – and will make a brief trip to Macquarie Island on an Australian Antarctic Division resupply ship in March.

On all islands except Macquarie, the broad-spectrum herbicide glyphosate (often known by its original trademark, Round-Up) has been used to manage weeds.

While it had been considered an environmentally safe chemical, reports of toxicity, leaching and resistance build-up to glyphosate have recently emerged. It can be toxic to aquatic organisms when applied at high rates, and has been detected in water run-off.

“There are real concerns that the application of glyphosate on heritage islands may be harmful to their unique and sensitive ecosystems, but almost no data is available to confirm or reject these concerns,” Ms Drew said.

“We don’t know how persistent glyphosate is in the soil, how it degrades or whether it is leached out, especially on high-rainfall islands. It has been found to be toxic to microbiology in soils and possibly to fish and bird life. This means it could present issues for a range of wildlife.”

Ms Drew’s research will compare the persistence, degradation and mobility of glyphosate in different climatic zones and soil conditions – from the subtropical South Solitary Island to subantarctic Macquarie.

The same introduced plants are posing a threat to little penguins and shearwaters on Big Island, off Wollongong.

On Macquarie Island, the eradication of rabbits has changed the island’s vegetation and it is feared that winter grass and chickweeds will expand.

“Understanding how glyphosate behaves is very important because increased rainfall intensity is predicted on some of these islands under climate change,” she said.

“What I discover will immediately guide National Parks and Wildlife weed control strategies.”