THE night antics of snails have been exposed as part of research project to improve control measures for the pest, which costs Western Australian grain growers more than $4 million a year. 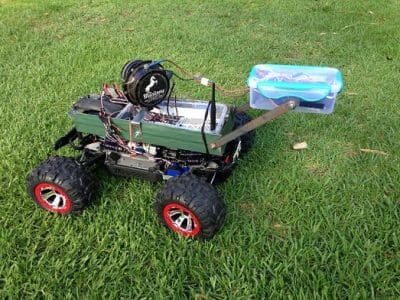 A smart phone attached to a roving vehicle is used to video and monitor the snail movements, to help improve baiting measures.

The Department of Agriculture and Food (DAFWA) has taken time lapse videos in the field over the past six months to track snail movements within crops and help plan more effective baiting programs.

DAFWA senior researcher John Moore said the videos, taken in a South Coast barley crop, revealed that snails regularly climbed plant stems but did not always move to the grain head, where they could be harvested with the grain.

“Last year there were higher levels of snail contamination in similar situations.”

In the next stage of research, the department will use smart phones attached to small, roving vehicles to video and monitor infestations over a wide area at night, when snails have been shown to be most active and can be more easily detected by the technology.

The observations will be used to develop a model of the conditions when snails are more likely to affect the grain head, leading to potential contamination of harvested grain.

Researchers are also developing smart phone cameras and devices to take images of snails found in grain as it is being harvested.

DAFWA entomologist and project leader Svetlana Micic said the aim was to eventually develop an algorithm to detect snails automatically as the grain was harvested, to determine whether the grain would meet market thresholds for the pest.

“If we can determine where the snails are and when they are actively feeding, we can tailor baiting programs to be applied when snails are more likely to encounter baits, reducing the cost of expensive baits significantly.”

Researchers will apply similar research to slugs this growing season.

By the end of the project, the department aims to develop an online computer tool to map snails or slugs in paddocks alongside various control strategies to optimise grains yields and profitability.