Eyes in the sky lock onto weeds/diseases/pests

ADVANCES in avionics and surveillance technology that have made drones simpler to fly and capable of carrying out ever more sophisticated tasks, are seeing a steady rise in their adoption in agriculture. 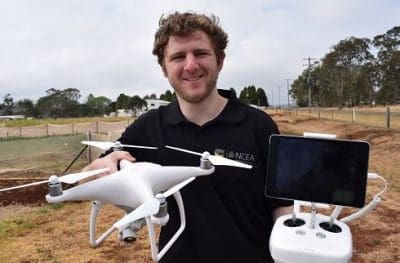 Putting the machines through their paces at a Future Farm field day run by the University of Southern Queensland’s National Centre for Engineering in Agriculture, NCEA research engineer, Derek Long, said the use of drones in the farming sector was on the rise.

“Drones have been around for a while, but what has really helped bring them to widespread use is their ease of use, particularly with products like the DJI Phantom 4,” he said.

“The manufacturer has come up with a very easy-to-use product that doesn’t require expert knowledge and people don’t need to know much about aerodynamics. Someone can just take it out of the container and use it.

“Before a product like that came along, drones weren’t so widespread and people needed to know more about them to use one effectively.

“Drones are definitely becoming more popular. I expect that as DJI and other manufacturers include more software features that are useful to farmers they will become even more widespread in agriculture.

“The Phantom 4 price is around $1700. That size is ideal for an ‘eye in the sky’ for farmers. There are smaller drones available, but they really wouldn’t be suitable in agriculture. They wouldn’t have the battery life to get around a farm very effectively.”

NCEA research fellow, Cheryl McCarthy, said the drone industry had been a key driver for the development of new cameras and sensor technology.

Dr McCarthy said research projects at NCEA were looking into vision systems that used a range of different cameras:

“With these (non-visible) kinds of cameras the vision system can have software that automatically interprets the images so it picks up individual edges and shapes so things like weeds can be automatically detected, flowers counted or plant yields estimated,” she said.

Dr McCarthy said some of the more advanced forms of camera technology were being developed for the early detection of pests and disease in the field. 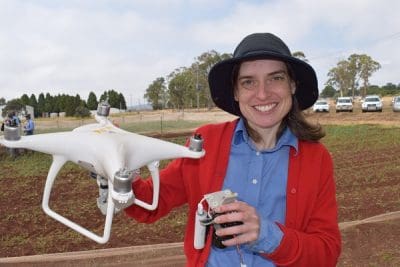 “While colour cameras are good for when symptoms start visually appearing, that’s often when the condition has already taken hold. So, some of these other cameras, like the thermal or other wavelength cameras, can see things before they become visible by humans,” she said.

“There is a research camera we are using that is sensitive to different chemical compounds, like water. It can tell you leaf water content. That camera with its sensing technology is used a lot with disease discrimination work because different diseases have different symptoms.”

Dr McCarthy said a key focus of the research work was on analysing what the cameras could see and how that information could be used to provide more useful analysis for farmers.

“At present the standard commercial service generates a map that shows areas that are healthy or unhealthy, based on NVDI. The work we are doing is to add extra skill to that and provide extra discrimination ability and identify particular conditions,” she said.

“We are developing software that can take information from a range of different cameras and fuse that information together to come up with a map for the farmer of likely areas of interest and what the problem could be.”

Dr McCarthy said the underlying benefit of a drone system was that what was visible in a colour image from the drone was probably not visible to someone on the ground.

“With a drone, it provides a view of the crop you don’t see from the ground. You can see large areas, so you get special context about how much of the field is affected, rather than just seeing the tip of the iceberg on the edge of the field,” she said.

Dr McCarthy said the work at NCEA was not far off producing tangible results for farmers.

“Some of the image analysis systems are quite close, such as the ones that do the weed mapping and identifying different weeds. That is quite advanced and is something farmers should be able to access in one to two years,” she said.

“The other work looking at the different wavelengths for disease discrimination work is probably three to five years away.”