WHEAT growers facing a delayed start to harvest after a wetter-than-average winter and mild spring are keenly aware of the impact climate variability has on profit, but how can weather be effectively factored into farm planning? 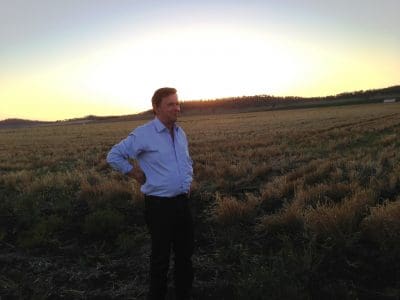 It is a question well-known climatologist Professor Roger Stone, Director at the International Centre for Applied Climate Science at the University of Southern Queensland, investigated as part of a ‘Risk in Farm Profit’ research project funded by the Grains Research and Development Corporation (GRDC).

The project examined how wheat profitability varied across different geographic regions due to a range of climate and market influences, including rainfall, temperatures and larger-scale drivers, such as El Nino-Southern Oscillation.

Prof Stone said the research was focused on identifying the level of influence these factors had had historically, as well as assessing how changes in climate and market environments could impact wheat growers in the future.

“Very often, the sheer complexity of managing a whole range of decisions of which climate risk is only one, can become overwhelming.

“However, we also know that by understanding how risk varies across the different agro-ecological zones and developing a risk assessment process that effectively assesses the relative influence of factors that contribute to farm profit variability we can still improve these complex decision making needs.”

This research revealed that across Queensland and New South Wales, each of the key profit drivers such as climate, yield, cost of production, and market price, exhibited significant variability annually.

While Prof Stone’s teams analyses of historical farm production data at 105 sites spread relatively uniformly across GRDC’s agro-ecological zones from 1982-2012 and climate data from 1900-2012, they indicate that the greatest risk of the impacts of variability is in Central New South Wales.

In contrast to this season’s rainfall, Prof Stone said their research indicated evidence of changing long-term rainfall trends with a decrease in April to September rainfall and increases during the October to December period.

“The changes in pre and post season rainfall are greatest in Queensland and New South Wales, while the number of frosts and the length of the frost season in this region is decreasing,” he said.

Prof Stone said long term modeling looking at climate changes from 2010-2039 also forecasts a decrease in in-crop rainfall, although the volatility of rainfall will increase in eastern states.

“One of the clear pictures emerging is that although the riskiness of production may decrease in inland regions of Queensland and New South Wales in 2030, the climate drivers of yield are likely to cause a decrease in average yields compared with the 1960-1990 period,” he said.

“But changes in average yield don’t tell the whole story. We can use historic cost and price data assessment to gauge the relative sensitivity of profit to climate change.

“The profitability of the highest and lowest 25% of growers responds differently to climate and market environments. Although profits increase for the bottom 25% of growers so does, unfortunately, the volatility. In contrast the top 25% of growers are likely to experience less volatility in their future profit.”

However, he said farm profit critically hinged on how growers were able to assess and successfully manage the farm risk that came with climate and market change.

“By improving our understanding of the historical variability of climate and market drivers of risk, as well as the response of production to these drivers and how this is likely to change in the future, we can enhance industry preparedness, leading to increased resilience and competitiveness.

“Risk management can provide more stable income streams for growers under increased climate and financial variability across a range of seasons and will also enhance the capacity of grain growers and their advisors to respond and adapt to climate and market risks, and remain viable and sustainable.”

He said understanding and implementing risk management by continuing to monitor research and development in this area and, if possible, build capacity by participating in grower workshops designed to develop enhanced climate risk management using the latest climate science and modelling, was critical to growers’ long-term sustainability.

“The relative strength of price and climate drivers varies regionally, however in general the sensitivity of profit to climate change over the next few decades is less in the modelling, than the sensitivity to price and cost fluctuations.

“In general, on a longer time-scale towards the end of the century, climate change becomes the dominant driver of profit.”