Fall armyworm puts beans to the side, tucks into corn MUNGBEANS and soybeans appear to be off the menu for the damaging exotic pest, fall armyworm, which has spread widely throughout Australia since entering the country via the Torres Strait in January last year.

However, the pest has proven particularly destructive in maize crops and, to a lesser extent, sorghum. 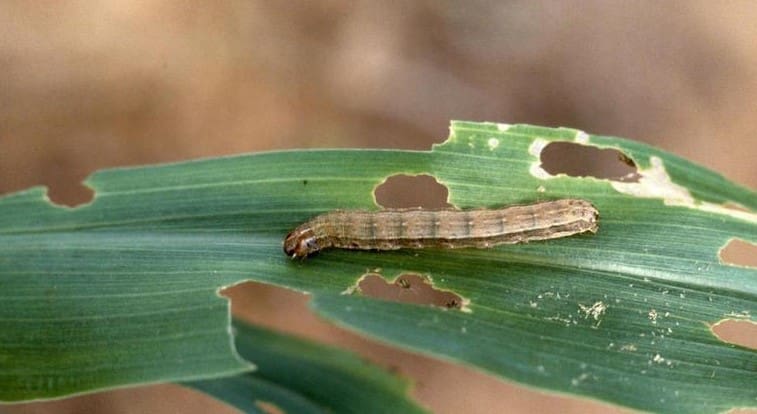 “The only episodes we have had have been up in the tropics where people have had self-set maize or sorghum in their mungbean or soybean crops,” he said.

“They have sprayed the self-set plants out with herbicide, the plants had died and the grubs have looked for the nearest source of green food which were the soybean and mungbean plants which they attacked.

“Maybe maize and sorghum are better hosts for the larvae because they can burrow deep in the thick stems where they are less at risk of being attacked by predators.”

“They really love maize and sweet corn in all regions. They have had particularly bad damage in the Burdekin and Mackay where the winter maize crop got hammered, and in the Kingaroy area in summer,” he said.

“That means that in areas where you can plant susceptible crops all year round growers may have to introduce a mid-summer break because the armyworm build up over the summer.”

Mr Brier said growers applying pesticide to try to control fall armyworm needed to be wary of building up pesticide resistance in heliothis.

“Often in maize you will get quite a few heliothis. If people are spraying it repeatedly, particularly with the same chemical, it will increase the selection pressure on the heliothis and speed up the development of resistance,” he said.