FALL armyworm has been detected at Geraldton in Western Australia’s Mid West, adding to the extent of its spread across Australia since the initial incursion was detected at Bamaga at the top of Cape York in Queensland in February.

The invasive pest has spread through Queensland and the Northern Territory to WA where it was found in northern WA at Kununurra in early April, and was confirmed near Broome on April 20.

In the latest detection at Geraldton, a single adult moth was collected in a pheromone trap monitored by the Department of Primary Industries and Regional Development (DPIRD). No larvae or feeding damage has been found to date.

DPIRD officers are liaising with growers and agronomists in WA to provide support with trapping and advice on minimising the impact of fall armyworm in horticultural and grains crops. 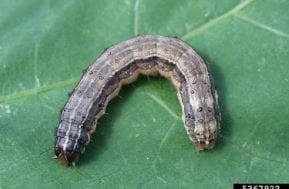 DPIRD senior research scientist Helen Spafford said vegetable and grain growers in the area should be checking for larvae in their crops, monitor unusual levels of damage, and report suspected fall armyworm to the department to assist with surveillance and potential management options.

“Accurately identifying fall armyworm will be important to determine the management options that can be used,” Dr Spafford said.

“This can be challenging because many caterpillars already present in the area will look similar to fall armyworm.

“Young, fall armyworm larvae are light coloured with a darker head. As they develop the body darkens, becoming more brown with white lengthwise stripes. They also develop dark spots, the pattern of which is important, with spines.”

“Surveillance in the grainbelt has not detected this pest to date, but we are regularly monitoring traps in collaboration with local grower groups,” he said.

“The potential presence and impact of fall armyworm on cereals, canola and pulse crops at various growth stages is not yet known.”

Fall armyworm is native to tropical and subtropical regions of the Americas. Since 2016 it has rapidly spread to and throughout Africa, the Indian subcontinent, China and Southeast Asia.

Producers, agronomists and homeowners are reminded to report suspected armyworm damage to DPIRD’s Pest and Disease Information Service on +61 (0)8 9368 3080, email [email protected], or use the MyPestGuideTM Reporter app.

More information on fall armyworm, including monitoring and management, is available from the department website.